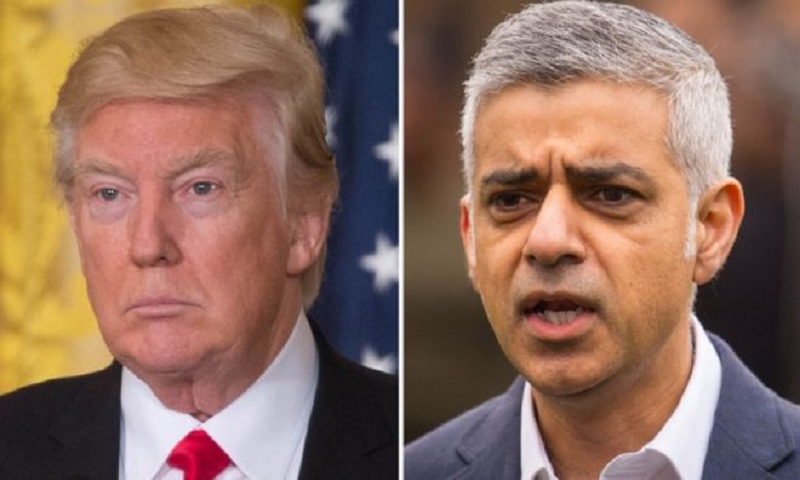 US President Donald Trump has once again criticised London Mayor Sadiq Khan, calling him a “national disgrace” who is destroying the UK’s capital.
His comments came after five attacks in London in less than 24 hours left three men dead and three others injured.

Labour leader Jeremy Corbyn said it was “absolutely awful” Mr Trump was using the “tragedy of people being murdered to attack the mayor”.President Trump’s tweets follow a long-running feud between the two men.

Retweeting a post by right-wing commentator Katie Hopkins about this weekend’s violence in London, the president said Mr Khan was “a disaster” and the capital needed a new mayor.

Mr Trump later followed it up with another post saying: “He is a national disgrace who is destroying the city of London!”

In response, Mr Khan’s spokesman said the mayor’s thoughts were with the victims’ families and he “is not going to waste his time responding to this sort of tweet”.

The mayor was focused on supporting the city’s communities and “over-stretched” emergency services, he added.

Mr Corbyn tweeted in defence of Mr Khan, saying he was “rightly supporting the police to do their job while Katie Hopkins spreads hateful and divisive rhetoric”.Police have made 14 arrests – including several boys and a girl – following the five separate attacks.

A man in his 30s then died after he was stabbed in Tower Hamlets on Saturday afternoon.

In the early hours of Saturday two men were stabbed in Clapham and another was stabbed in Brixton.

The deaths take the total number of murders in London in 2019 to 56. This time last year there had been 77 homicides, 48 of which were stabbings.

President Trump and Mr Khan have clashed many times in the past.

The president called Mr Khan a “stone cold loser who should focus on crime in London” shortly before landing in Stansted ahead of his three-day state visit to the UK earlier this month.

It followed comments from the mayor of London that the UK should not be “rolling out the red carpet” for Mr Trump during his visit.

In the past Mr Trump has challenged Mr Khan to an IQ test and been critical of his response to the London Bridge attack in 2017.