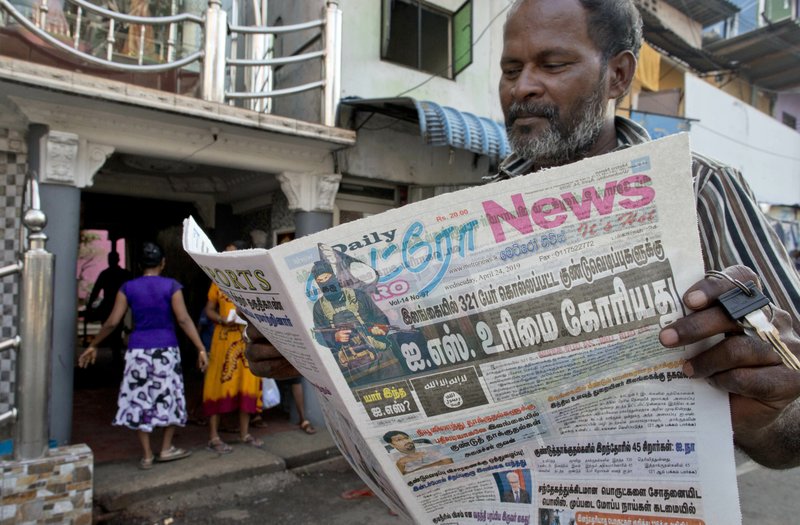 Colombo, Apr 24 : The death toll from the Easter suicide bombings in Sri Lanka rose to 359 and more suspects have been arrested, police said Wednesday.

The Islamic State group has claimed responsibility and released images that purported to show the seven bombers who blew themselves up at three churches and three hotels Sunday in the worst violence this South Asian island nation has seen since its civil war ended a decade ago.

The government has said the attacks were carried out by Islamic fundamentalists in apparent retaliation for the New Zealand mosque massacre last month but has said the seven bombers were all Sri Lankan. Prime Minister Ranil Wickremesinghe said investigators were still working to determine the extent of the bombers’ foreign links.

Police spokesman Ruwan Gunasekara said Wednesday morning that 18 suspects were arrested overnight, raising the total detained to 58. The prime minister had warned on Tuesday that several suspects armed with explosives were still at large.

The Islamic State group has lost all the territory it once held in Iraq and Syria and has made a series of unsupported claims of responsibility around the world.

The IS group’s Aamaq news agency released an image purported to show the leader of the attackers, standing amid seven others whose faces are covered. The group did not provide any other evidence for its claim, and the identities of those depicted in the image were not independently verified.

Meanwhile, in an address to Parliament, Ruwan Wijewardene, the state minister of defense, said “weakness” within Sri Lanka’s security apparatus led to the failure to prevent the nine bombings.

“By now it has been established that the intelligence units were aware of this attack and a group of responsible people were informed about the impending attack,” Wijewardene said. “However, this information has been circulated among only a few officials.”

In a live address to the nation late Tuesday, Sri Lanka President Maithripala Sirisena said he also was kept in the dark on the intelligence about the planned attacks and vowed to “take stern action” against the officials who failed to share the information. He also pledged “a complete restructuring” of the security forces.

Wijewardene said the government had evidence that the bombings were carried out “by an Islamic fundamentalist group” in retaliation for the March 15 mosque shootings in Christchurch, New Zealand, that killed 50 people, although he did not disclose what the evidence was.

The office of New Zealand Prime Minister Jacinda Ardern issued a statement responding to the Christchurch claim that described Sri Lanka’s investigation as “in its early stages.”

“New Zealand has not yet seen any intelligence upon which such an assessment might be based,” it said. An Australian white supremacist, Brenton Harrison Tarrant, was arrested in the Christchurch shootings.

A block on most social media since the attacks has left a vacuum of information, fueling confusion and giving little reassurance the danger had passed.

Wickremesinghe said he feared the massacre could unleash instability and he vowed to “vest all necessary powers with the defense forces” to act against those responsible.

The history of Buddhist-majority Sri Lanka, a country of 21 million including large Hindu, Muslim and Christian minorities, is rife with ethnic and sectarian conflict.

In the nation’s 26-year civil war, the Tamil Tigers, a powerful rebel army known for using suicide bombers, had little history of targeting Christians and was crushed by the government in 2009. Anti-Muslim bigotry fed by Buddhist nationalists has swept the country recently.

In March 2018, Buddhist mobs ransacked businesses and set houses on fire in Muslim neighborhoods around Kandy, a city in central Sri Lanka that is popular with tourists.

After the mob attacks, Sri Lanka’s government also blocked some social media sites, hoping to slow the spread of false information or threats that could incite more violence.

Sri Lanka has no history of Islamic militancy. Its small Christian community has seen only scattered incidents of harassment.