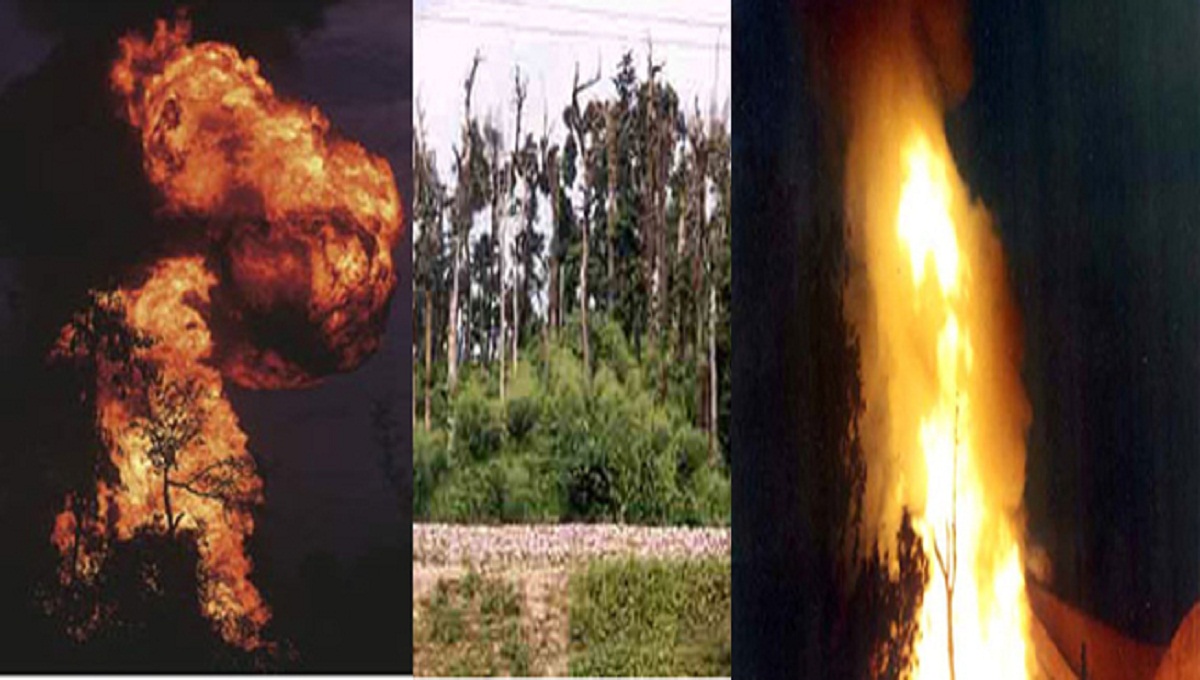 Photo: On June 14, 1997 a destructive gas well blowout occurred close to midnight at the Magurchhara gas field in Kamalganj, Moulvibazar.

Moulvibazar Correspondent : Today marks the 22nd anniversary of possibly the first real man-made disaster affecting the environment to occur in Bangladesh, as a consequence of contracts signed between the government and the powerful set international oil companies, or IOCs.

On June 14, 1997 a destructive gas well blowout occurred close to midnight at the Magurchhara gas field in Kamalganj, Moulvibazar. US oil major Occidental was drilling the well at the time. Later, the company sold its interests in Bangladesh to Unocal, which in time merged with Chevron.

Although an investigation report into the incident blamed the irresponsibility, negligence, and mistakes of those operating the well for the tragedy, neither Occidental nor the IOCs its interest proceeded to merge into has ever provided any compensation for the explosion.

From then, various organizations have been observing June 14 every year through different programs.

The area affected by the explosion included reserved forest, part of the Akhaura-Sylhet railway, Fulbari tea orchard, part of the Kamalganj- Srimangal highway, Magurchara Khasia punji and the main power line of PDB.

Besides, 28 tea gardens of the area were affected in the heavy shake. Trees, environment, and above all the biodiversity over an area of nearly 700 hectares of nearby forest area were severely damaged. It I 200 billion cubic feet of gas was wasted whose market values stood at 50 crore US Dollar.

The total loss caused by the explosion has been estimated from between Tk 9,000 crore to TK 14,000 crore. But no pragmatic step has been taken yet to collect the compensation from the perpetrators.

A probe body, led by a senior official of Ministry of Power, Energy and Mineral Resources was formed which submitted their 500-page report on July 30,  the same year.

Later, the Parliamentary Standing Committee on the Ministry of Power, Energy and Mineral Resources formed a three-member sub-committee to find out the extent of damages, collect the compensation and distribute it.

The probe body told the sub-committee that the accident happened due to the failure of Occidental to perform their duties as planned. The investigators pointed out 15 to 16 errors performed by the company.

Although the officials of Occidental objected about two or three errors, they acknowledged the others and signed the investigation report.

But without paying the compensation, the company left the country after handing over the responsibility of the gas field to another US company Unocal. The second company later handed over their interest to US company Chevron and left Bangladesh.

However, the total loss in the forest area has been counted TK 9858 crore 31 lakh. Additionally 2,000 feet railway track was damaged which cost TK 81 lakh 54 thousand 395. Furthermore, Tk 21 crore for road and Tk 13 lakh for gas pipeline were reported as loss.

Meanwhile, local organizations, including environmentalists, have been protesting for a long time demanding compensation.

Several organizations are set to observe the day through discussion programs, human chain and various programs on Friday.

Hill Protection and Development Society’s Kamalganj Upazila unit president Monayem Khan said that they have a plan to stage a human chain from Kamalganj upazila complex to Magurchara area.

Christchurch mosque attacks suspect pleads not guilty to all 92 charges