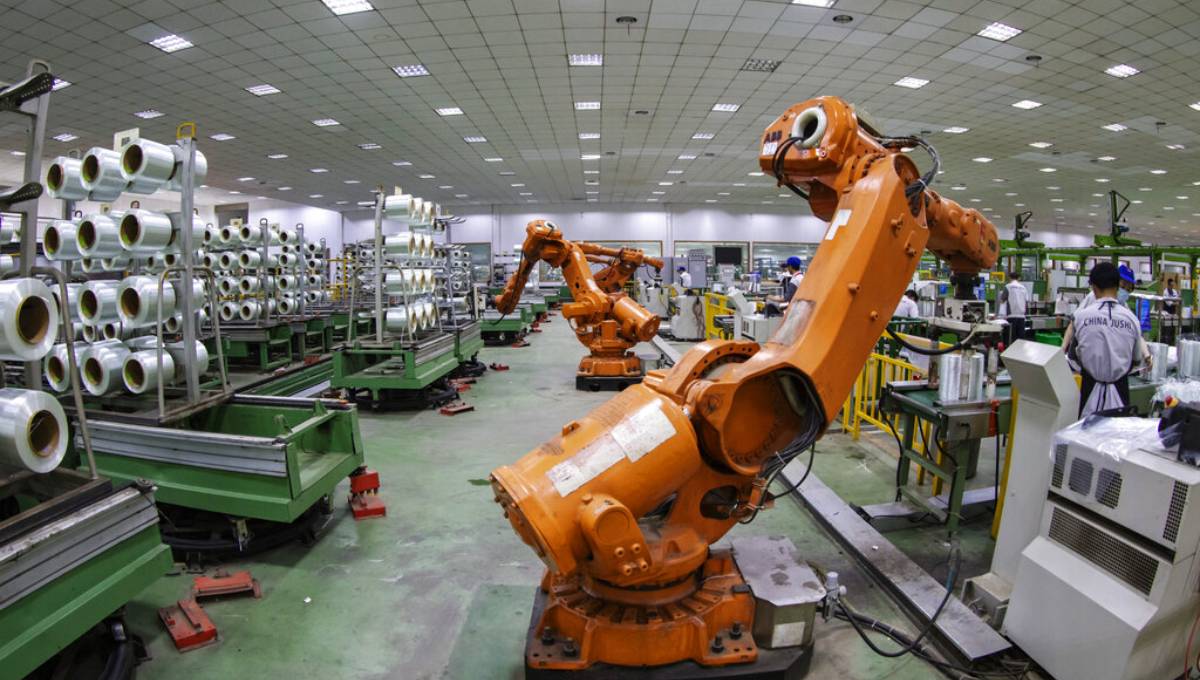 Photo: workers wrap fibreglass next to the robot arms at a factory in Jiujiang in central China’s Jiangxi province.

Beijing, May 8 : China’s exports fell unexpectedly in April, adding to pressure on Beijing ahead of negotiations on ending a tariff war with Washington over Chinese technology ambitions.

April exports sank 2.7% from a year ago to $193.5 billion, a reverse from March’s 14.2% growth, customs data showed. That was well below private sector forecasts of growth in low single digits.

Imports rose 4% to $179.6 billion, rebounding from the previous month’s 7.6% decline. That added to signs government efforts to reverse an economic downturn might be gaining traction.

Imports of American goods fell 26% from a year earlier to $10.3 billion. Exports to the United States, China’s biggest foreign market, were down 13% at $31.4 billion.

Talks in Washington are due to go ahead Thursday despite earlier fears Beijing might pull out due to Trump’s threat. China said Tuesday its economy czar will participate as scheduled.

Weak trade figures might “add more pressure to leaders from both sides to get a deal done,” Macquarie Bank said in a report. It said the decision to send Vice Premier Liu He to Washington suggests “China doesn’t want the talks to break.”

Exports to the U.S. market are down 9.7% for the first four months of the year following Trump’s tariff hikes in response to complaints Beijing steals or pressures companies to hand over technology.

In the same four-month period, imports of American goods plunged 30.4% following Chinese retaliatory duties and orders to buyers to find other suppliers.

Washington is pressing Beijing to roll back plans for government-led creation of Chinese global competitors in robotics, electric cars and other technologies. The United States also wants other changes including cuts in subsidies to Chinese industry.

Chinese leaders have expressed confidence their economy can survive the tariff fight. But while American exporters have been hit hardest, Chinese industries including electronics that Beijing sees its economic future also have suffered double-digit declines in U.S. sales.

Both governments have said negotiations are making progress, but Trump expressed frustration Sunday at what he called their slow pace. U.S. officials accused Beijing of trying to renege on commitments made in earlier talks.

Beijing responded with penalty duties on $110 billion of American imports. It also has retaliated by slowing customs clearance for U.S. companies in China and delaying issuing licenses in insurance and other industries.

On Sunday, Trump said on Twitter he would raise the 10% charge to 25% percent, effective Friday. He said he was considering imposing penalties on the rest of Chinese goods shipped to the United States.

Economists say even if a settlement is reached, China’s exports this year will be lackluster due to weak global demand, putting pressure on manufacturers that support millions of jobs.