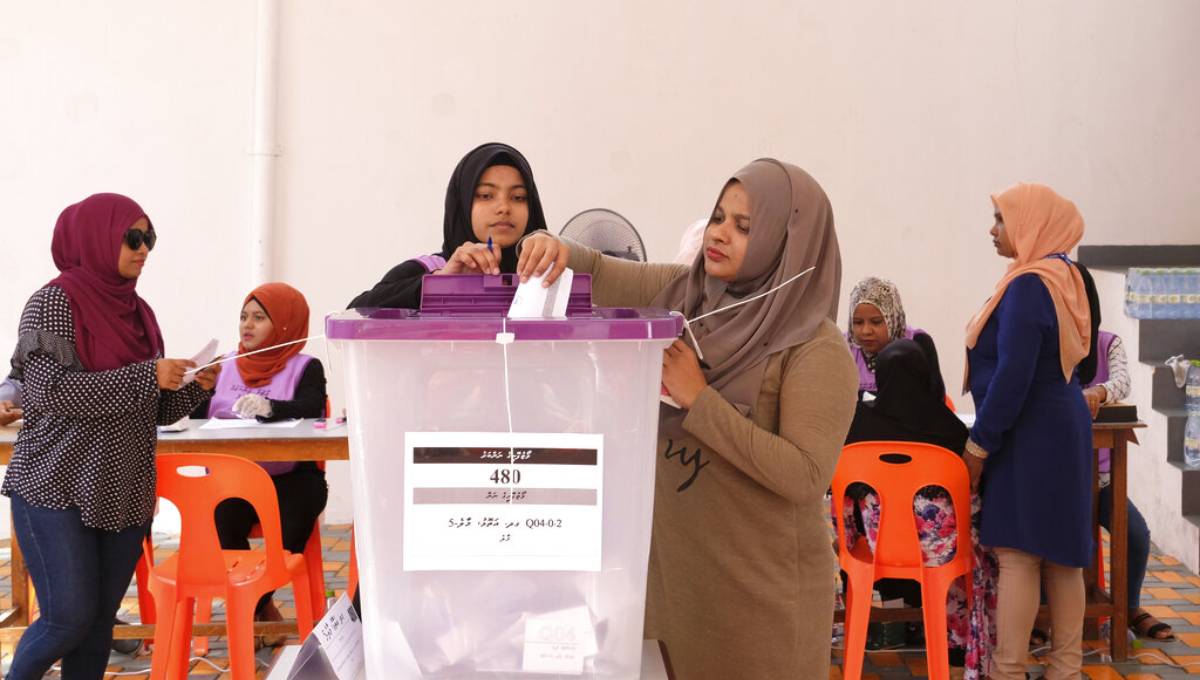 Male, Apr 6 : Voting began in the Maldives in a crucial parliamentary election on Saturday many hope would help President Ibrahim Mohammed Solih to overcome a coalition split that has hampered his efforts to restore political freedoms and tackle corruption.

Thousands lined up to cast their ballots across the Indian Ocean archipelago nation known for its luxury resorts.

Solih’s Maldivian Democratic Party is seeking at least 44 seats in the 87-member Parliament for a majority to pass legislation needed to implement pledges from last year’s presidential campaign. His coalition currently has 52 seats, but one partner with 22 seats is now aligned with former strongman Yameen Abdul Gayoom.

Solih defeated Yameen last year, giving new hope to the young democracy that has gone through a tumultuous transition that threatened to drag the Maldives back to its autocratic past. Yameen had curtailed freedom of speech and jailed his political rivals.

The Maldives became a multiparty democracy in 2008 after decades of autocratic rule.

Solih was only a fallback choice as president for his party because charismatic former President Mohamed Nasheed had been sentenced to prison under Yameen and therefore was ineligible to run.

Solih promised reforms, an end to political influence over the courts, police and the bureaucracy, and the recovery of money lost through corruption.

Opposition politicians came together in a grand alliance to defeat their common foe, Yameen. But soon the coalition cracked and despite repeated efforts, Solih failed to secure parliamentary approval for promised commissions to inquire into corruption, the disappearance of a journalist and the killing of a blogger during Yameen’s rule.

Afshan Latheef, the campaign spokeswoman for Solih’s party, said it is only fielding candidates from within the party to ensure stability in Parliament and the fulfillment of Solih’s promises.

Yameen is facing corruption charges and is under house arrest while his case is being heard. He is not running in Saturday’s elections but will be on the political front line after the vote, party official Abdul Rahim Abdulla said.

Ahmed Tholal of the group Transparency Maldives said the political squabbles among the parties have eclipsed the real problems facing the country.

“They are taking away the real issues. Corruption, health and human rights issues are not being highlighted in the campaign,” he said.

Ahmed Saaif Shiyad, a 20-year-old student, said the election is important because the country hasn’t had political stability since Nasheed resigned in February 2012 amid public protests over his decision to arrest a top judge. Yameen won the presidential election the following year.

“In order to have political stability it’s important to give a majority to the ruling coalition,” Shiyad said.

Nasheed, who was released by the courts after Solih’s election, is running for a seat in Saturday’s elections.

More than 264,000 people are eligible to vote for 386 candidates running for the 87 seats in Parliament.