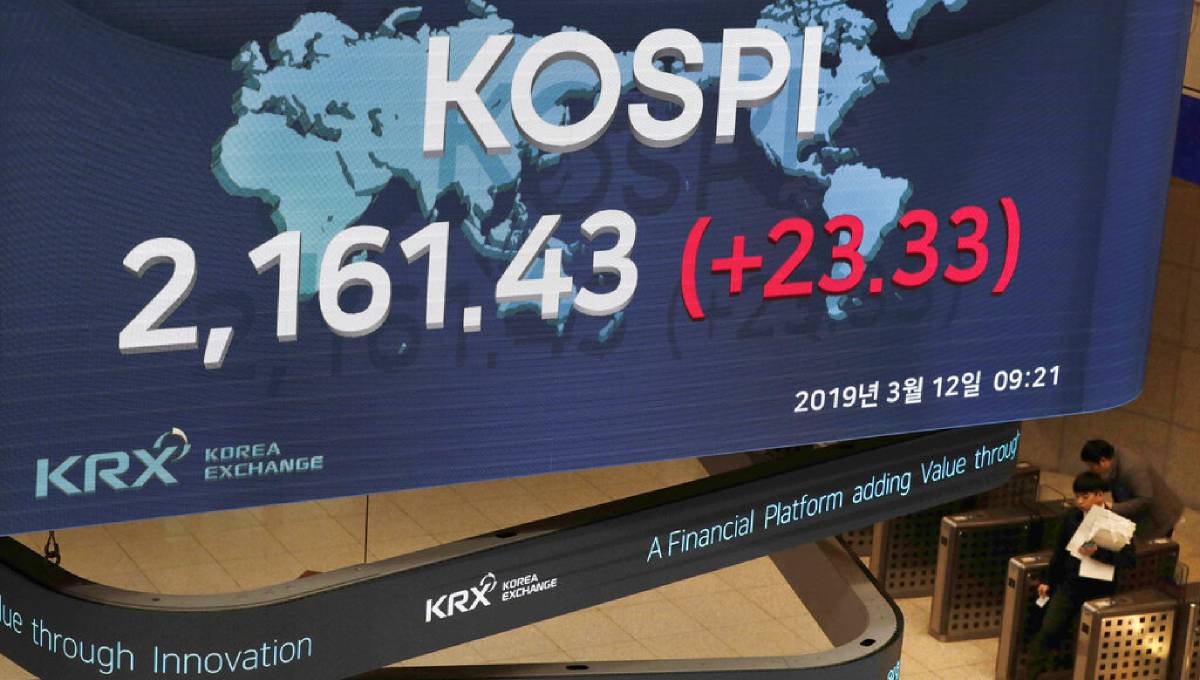 Photo: A man walks near the screens showing the Korea Composite Stock Price Index (KOSPI) and the foreign exchange rates at the Korea Exchange in Seoul, South Korea, Tuesday, March 12, 2019.

Tech stocks drove the benchmark Standard &amp; Poor’s 500 index to its biggest daily gain since January, snapping a five-day losing streak for the S&amp;P, which was coming off its worst weekly stumble this year.

Boeing Co.’s stock slumped 5.3 percent after the second fatal crash involving the newest version of its popular 737 jetliner. An Ethiopian Airlines jetliner went down Sunday, killing 157 people. That followed the crash of another 737 Max 8 crashed in Indonesia on Oct. 29 that killed 189 people.

Authorities in Ethiopia, China, Singapore and Indonesia have grounded all Boeing 737 Max 8 aircraft. At one point Monday, Boeing shares slid more than 13 percent.

British lawmakers were due to vote Tuesday on a plan to leave the European Union following negotiations in Strasbourg over details including Britain’s border with the Irish Republic.

Britain is due to pull out of the EU in less than three weeks, on March 29, but Prime Minister Theresa May’s government has not been able to win parliamentary approval for its agreement. The impasse has raised fears of a chaotic “no-deal” Brexit that could disrupt businesses in Britain and the 27 remaining EU countries. May said the latest changes should overcome lawmakers’ qualms about a mechanism to keep an open border between Britain’s Northern Ireland and EU member Ireland.

“Investors will likely favor risk-taking on positive Brexit news and a strong showing on Wall Street overnight,” said Nicholas Mapa and Prakash Sakpal of ING in a report. “Technology and energy shares are seen to drive the rally in Asia but market players remain wary ahead of China retail sales data later in the week.”

ENERGY: Benchmark U.S. crude rose 19 cents to $56.98 per barrel in electronic trading on the New York Mercantile Exchange. The contract jumped 72 cents on Monday to close at $56.79. Brent crude, used to price international oils, added 12 cents to $66.70 per barrel in London. It gained 84 cents the previous session to $66.58.