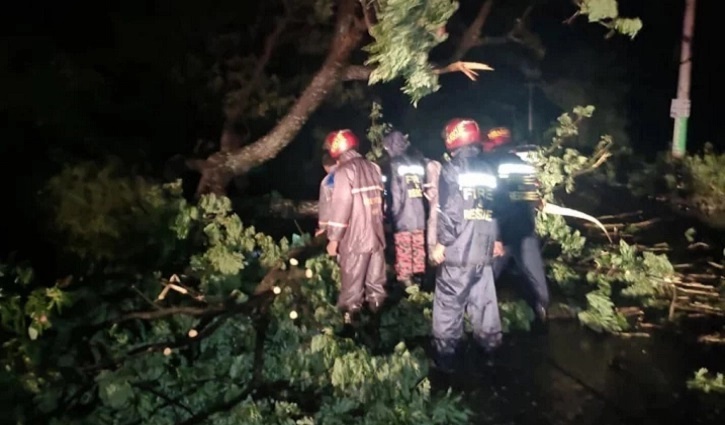 At least 13 people died in six districts across Bangladesh as the cyclone Sitrang made landfall early Tuesday and crossed Barishal-Chattogram coast, leaving a trail of destruction.

According to reports from UNB correspondents from Cumilla, Narail, Sirajganj, Bhola, Barguna and Gopalganj, most of the casualties happened because of falling of trees since Monday morning as Bangladesh experienced moderate to heavy rains throughout the day.

In Cumilla’s Nangalkot upazila, a couple and their four-year-old daughter died after a huge tree fell on their house at Hesakhal area on Monday night. They were asleep when it happened.

The incident occurred around 10 pm when the wind speed was 60 kmph in Cumilla as the cyclone was making landfall, he said.

A 35-year-old woman–Morzina Begum–was first reported to be dead as a tree fell on her head at Lohagara upazila complex in Narail around 11 am on Monday.

Morzina hailing from Bagerhat used to work as a maid at Rajpur village in the upazila, said Md Nasir Uddin, Officer-in-Charge of Lohagara Police Station.

During the incident her 11-year-old son was with her, but he survived, said the OC.

In Sirajganj sadar upazila, a mother and her son died as their boat sank in a canal of Jamuna River on Monday night.

Ayesha’s husband and two other children were rescued from the scene of the accident, he said.

They were traveling home through the canal on a boat around 8 pm Monday when it capsized amid bad weather. Arafat died at the scene while Aysha was declared dead after being taken to a hospital, said the OC.

In Bhola, four people died at sadar, Doulatkhan, Lalmohan and Char Fasson being crushed under trees and from drowning.

Mofizul died after a tree fell on his house on Monday night at Dhania union in sadar upazila and Bibi Khadiza also died being crushed under a tree. Monir was on a motorcycle when a tree branch fell, leaving him dead on the spot while Rabeya drowned.

In Barguna sadar upazila a 110-year-old woman died while having dinner as a tree fell on her house at Sonakhali village.

She was alone in the house and died instantly, said Humayun Kabir, local Union Parishad Chairman.

In Gopalganj district two women were crushed under trees at Tungipara upazila.

The deceased were Sharmin,25, wife of Rezaul from Patgati union and Rumisa, 65, wife of Hanna Talukder from Banshbaria union.

Sharmin died on Monday night as a tree fell on her at Panchkahania village during storm while Rumisa got crushed under a tree at her home at Dumuria village, said Minhazur Rahman, District Relief and Rehabilitation Officer.

He said their families will get Tk 25,000 as assistance, Tk 6000 for rehabilitation and tin sheets.