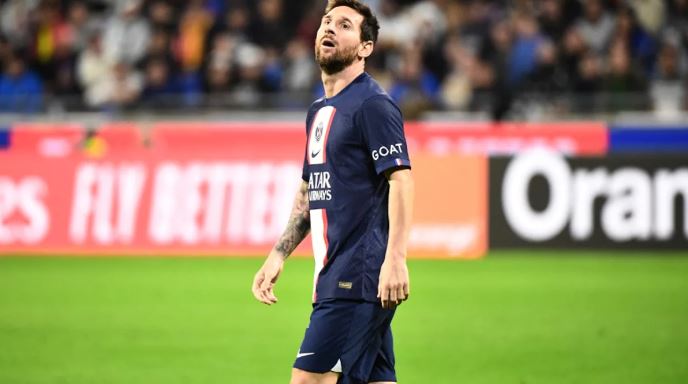 Lionel Messi struck after five minutes as Paris Saint-Germain edged Lyon 1-0 to regain top spot in the Ligue 1 table ahead of Marseille on Sunday.

Neymar set up the Argentinian with his seventh assist in eight Ligue 1 games. The victory pulled PSG two points clear of Marseille who had taken top spot earlier with a 1-1 draw at home against Rennes.

Lorient, 3-1 winners over Auxerre, are three points adrift of the leaders. Lens dropped to fourth after being held to a goalless draw in Nantes.

“PSG played a great game tonight, against a difficult team which was waiting for us,” said PSG coach Christophe Galtier.

“We scored a good goal and could have scored others. We were much more balanced, Neymar in particular gave us a balance which was really necessary. Even if we were less mobile in the second half we still had a lot of chances.”

PSG were imperious in the first half but did not finish off their opponent who woke up after the break with Johann Lepenant coming on in place of a tired Corentin Tolisso.

But Galtier’s side held on to inflict Lyon’s third defeat of the season.

Galtier’s “MNM” attack is firing on all cylinders, with eight goals in Ligue 1 for Neymar, seven for Kylian Mbappe and four for Messi.

Earlier, Marseille midfielder Matteo Guendouzi scored both goals in a 1-1 draw at home against Rennes.

Guendouzi bundled past home keeper Pau Lopez to give Rennes the advantage after 26 minutes but the former Arsenal player redeemed himself with a header past ex-Marseille goalkeeper Steve Mandanda seven minutes after the break.

Mandanda returned to a warm welcome for his first match back at the Velodrome where the former Marseille skipper spent 15 years before leaving for Brittany in the summer.

“He was very good, very calm, while it was very difficult for him emotionally,” said Rennes coach Bruno Genesio of Mandanda who holds the record for the number of games played for Marseille with 613.

Nice fell 1-0 at home against Angers in a match in which defender Jean-Clair Todibo earned a red card after five seconds and both teams finished with 10 men.

Todibo was sent off after just nine seconds, and that includes the four seconds it took referee Bastien Dechepy to pull the card out of his pocket.

Sofiane Boufal kicked off for Angers and passed to Adrien Hunou. He found striker Abdallah Sima surging forward. Sima pushed the ball past Todibo who stuck out a leg and tripped the striker.

After a video review, the decision that Todibo was the last defender stood.

Even though Boufal was later sent off, Angers won 1-0 with Nabil Bentaleb scoring just before the break.

“I don’t think it was a red card,” said Nice coach Lucien Favre saying Dante and Jordan Lotomba were covering. “It was not a scoring opportunity.

“We would have won this game if we had played with eleven players.”