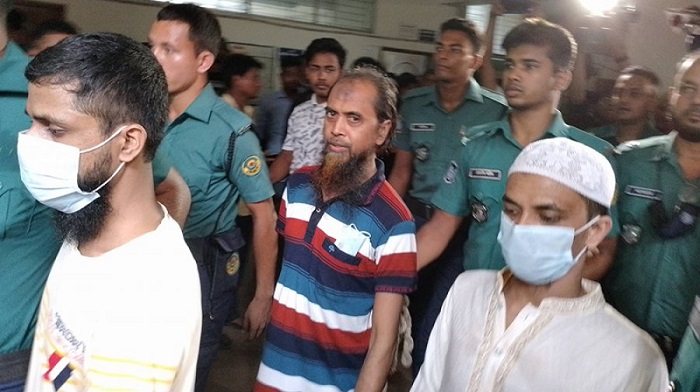 A tribunal in Chattogram has sentenced five members of the banned militant group Jama’atul Mujahideen Bangladesh (JMB) to death for the bomb attack on two mosques at the Bangladesh Navy’s Issa Khan Base in the district.

The verdict was pronounced by Chattogram Anti-Terrorism Tribunal Judge Abdul Halim on Wednesday in presence of the four accused.

Of them, Sakhawat Hossain is fugitive.

On December 18, 2015, bomb blasts occurred at two mosques in the Issa Khan Base after Friday prayers.

A total of 24 people, both civilian and military, were injured in the blasts.

Sakhawat, Mannan, Ramzan and Babul were named as suspects.

After further investigations and interrogations, police found evidence that Mannan’s older brother, JMB member Gaffar, was involved in the attack.

According to the case documents, the attack was carried out under orders from the JMB’s Chattogram regional leader Raisul Islam Khan Noman aka Nafis aka Fardin.

Fardin was killed in an explosion while trying to make grenades in Bogura on Apr 3, 2016, police said. He was not named as a suspect due to his death.

EPZ police submitted the charge-sheet in the case against the five suspects on October 15, 2017. On August 1, the court finished hearing the arguments of both sides.