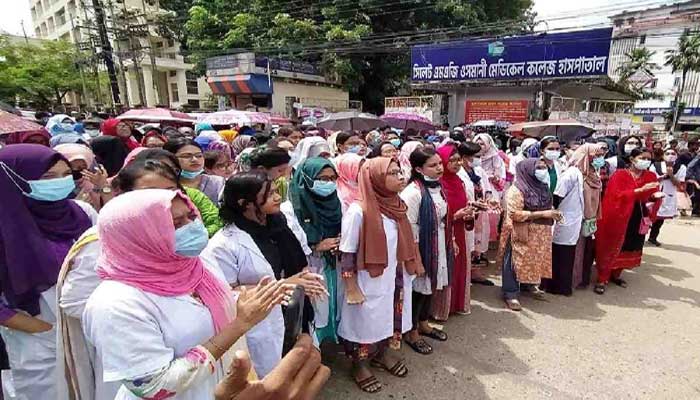 Students at Sylhet MAG Osmani Medical College and Hospital (SOMCH) on Thursday called off their protest against the attack on two medical interns by relatives of a patient, following the arrest of the prime accused.

“Following assurances from SOMCH authorities, we have suspended our movement after giving an ultimatum to meet all our demands within a week,” said general secretary of Intern Physicians’ Council, Dr Matiur Rahman, reports UNB.

“Medical interns have joined work and students went back to their classes,” he added.

Earlier this morning, the protesters held a meeting with SOMCH authorities, where health department officials were present.

“The prime accused was arrested and the administration has promised to increase security inside the campus soon. So, we’ve suspended our movement,” said Dr Matiur.

“However, if all the accused are not arrested and security is not ensured within seven days, we will resume the movement again,” he added.

On Wednesday, the protesting interns gave an ultimatum till Thursday morning to meet their demands threatening to stop all the activities of the hospital, including the outdoor patient service.

They took position on the college campus and put the administrative building gate under lock and key till noon, boycotting their classes and exams.

The interns also blocked the road in front of the main gate of the hospital around 1pm, causing massive traffic jams on both sides of Rikabibazar-Medical Road.

On Sunday, two relatives of a patient misbehaved with a female intern at the hospital. They were later handed over to the police.

To take revenge, relatives of the patient entered the college campus and stabbed two interns – Emon Ahmed, 24 and Rudra Nath, 22 — on Monday night.

On Monday, at 10 pm, all interns at the hospital went on work abstention and announced to go on strike until all the attackers were arrested.

They closed all the hospital gates and took position on the main road in front of it.

On Tuesday, the interns suspended their movement around 3am and threatened to go for movement again if their demands go unheeded by 2 pm.

They again resumed their strike at 5pm “as all the culprits were not arrested as per their demands”.

Father-daughter die, 3 of family hurt as car falls into canal in Sylhet