PM seeks Japan’s support in repatriation of Rohingyas to Myanmar 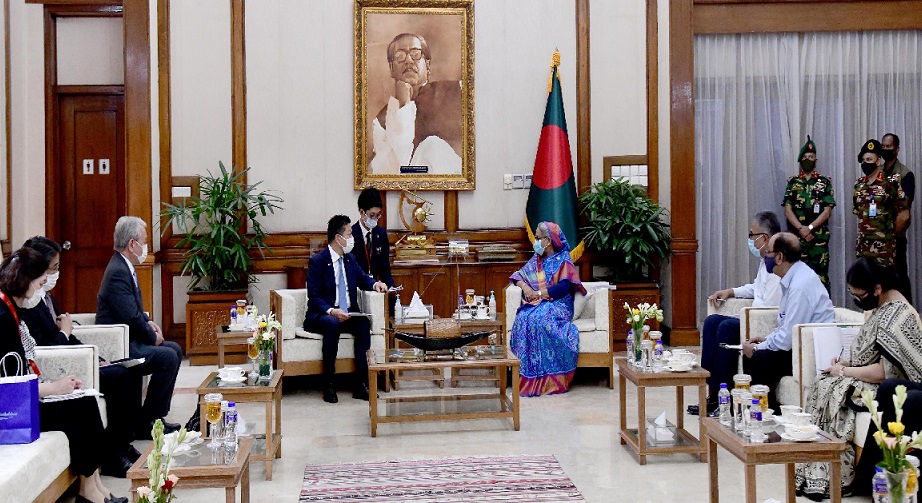 Prime Minister Sheikh Hasina on Sunday sought Japanese support for the repatriation of Rohingyas to Myanmar, their homeland, as the forcibly displaced people have become a burden on Bangladesh for the last several years.

She made this call when Japanese Parliamentary Vice Minister for Foreign Affairs HONDA Taro and President of Japan International Corporation Agency (JICA) TANAKA Akihiko met her at her official residence Ganobhaban.

PM’s Press Secretary Ihsanul Karim told a media briefing that the premier urged the Japanese to take initiative so Myanmar takes their displaced nationals back home in a dignified manner.

In response the Japanese parliamentary vice minister said his country also wants a dignified return home of the displaced people.

In this regard, the JICA president said the government of Bangladesh is providing proper support to implement the mega projects and it is also determined to complete the Maheshkhali–Matarbari project.

HONDA Taro appreciated Bangladesh for its graduation from the status of least developed country (LDC).

“Many Japanese companies are keen to invest in Bangladesh,” he was quoted as saying.

They congratulated PM Hasina on construction of Padma Bridge with own funds saying  it would accelerate economic development of Bangladesh.

They said Padma Bridge and Bangabandhu Bridge connected the southern and northern regions directly with the capital.

Hasina expressed deep shock at the recent assassination of former Japanese Prime Minister Shinzo Abe and paid tribute to him as a great friend of Bangladesh.

She recalled that Japan soon after the Liberation War recognised Bangladesh and since then became its strong development.

The Japanese vice minister and the JICA president recalled the visit of Shinzo Abe to Bangladesh in 2014.

They said his visit elevated the bilateral relationship between the two countries to a comprehensive partnership level.

Talking about the Holey Artisan attack, Hasina said no recurrence of such incident has taken place due to the strong steps taken by law enforcement agencies.

She recalled the visit of Father of the Nation Bangabandhu Sheikh Mujibur Rahman to Japan in 1973 and said he had laid the foundation of the today’s exemplary Bangladesh-Japan relationship.

Hasina said Bangabandhu was a great admirer of Japan’s socioeconomic and technological development. He had also wanted to replicate the same here in Bangladesh, she added.