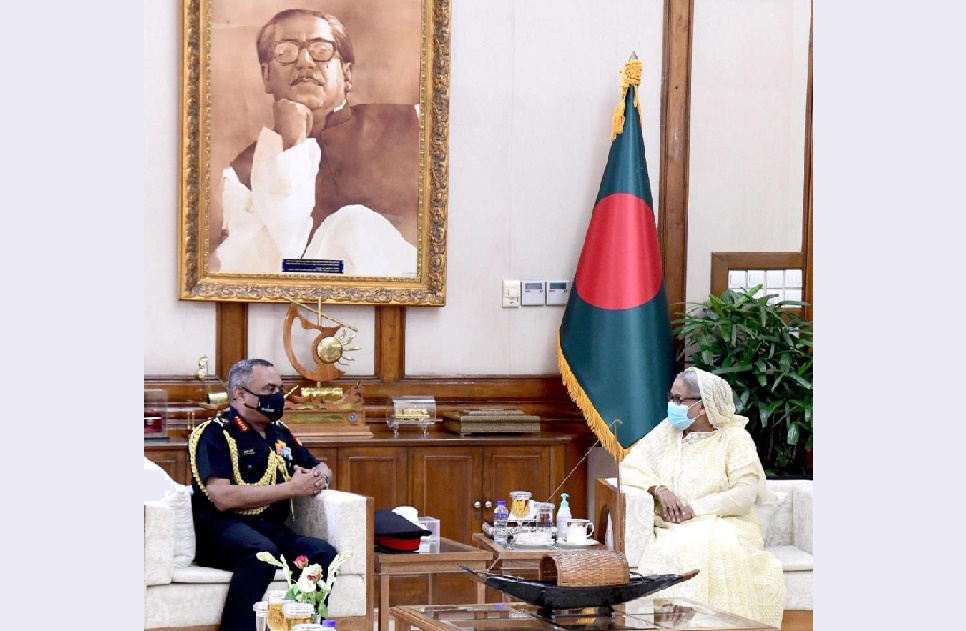 Prime Minister Sheikh Hasina on Tuesday denounced any kind of war saying it always causes sufferings to the mass people.

She said this while visiting Indian Army chief General Manoj Pande called on her at her official residence Ganabhaban.

PM’s press secretary Ihsanul Karim briefed the reporters after the call on.

The PM was quoted as saying that even the US government is sending messages to American people asking them to save electricity and energy.

“Due to the war all, including the USA, are facing sufferings,” she said referring the ongoing Russia-Ukraine war.

Hasina recalled the crucial role of Indian government, armed forces and the people of India during the 1971 Liberation War Bengalis fought under the leadership of the Father of the Nation Bangabandhu Sheikh Mujibur Rahman.

She expressed gratefulness to Indian armed forces who laid down their lives and who got wounded in the battlefield in 1971 in Bangladesh.

Referring the current flood situation in Bangladesh the prime minister said it was caused by recent flash flood in Assam, Meghalaya and Arunachal.

She mentioned that Bangladesh stands ready to work together with India to overcome any sort of natural disaster.

Hasina described the relation between Bangladesh and India as wonderful.

She said that main aim of the countries in South Asia should be to end poverty and work together to alleviate the condition of the people.

The Indian Army chief talked about the ongoing military cooperation between the two countries.

He said that tomorrow he would visit Ramu Cantonment in Cox’s Bazar.

He said he was deeply moved during his visit to Father of the Nation Bangabandhu Sheikh Mujibur Rahman Memorial Museum.

“This museum remains as a symbol of sacrifice and will inspire the new generation to love their country,” he said.

Referring to the Victory Day celebration in India, Gen. Pande said that representatives from Bangladesh also joined the events which play significant role in consolidating friendly relations between Bangladesh and India

He also praised the ‘Proyash’
– a specialised institute run by Bangladesh Army which provides services for holistic development of the children with special educational needs through multidimensional programmes.

PM’s Principal Secretary Ahmad Kaikaus was present at the meeting.