The US sanctions tantamount to violation of human rights: PM Sheikh Hasina 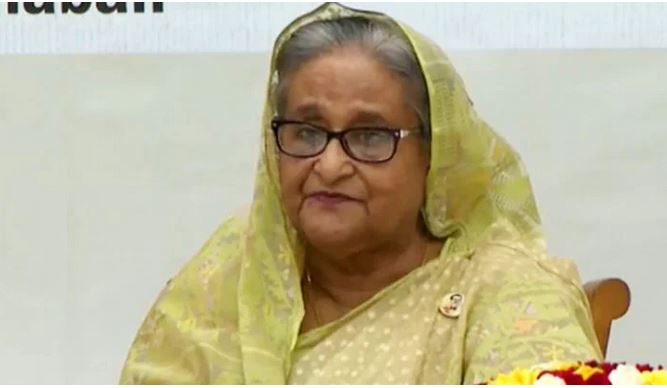 Prime Minister Sheikh Hasina on Thursday asked the US to withdraw the sanctions it imposed on Russia as their punitive action is causing immense sufferings across the globe.

“I think that it is justified to retreat from the act of punishing one country which is hurting the people of the whole world,” she said while inaugurating the new building of the Ministry of Foreign Affairs in Dhaka.

She said that the US-led sanctions were tantamount to violation of human rights as it is not fair to deprive all humans of their basic rights.

Hasina said it is unfortunate that when the whole world is being affected by the Covid-19 pandemic the Russia-Ukraine war has brought more miseries.

“Above all, the US-imposed sanctions have blocked the availability of items that Bangladesh imports,” she said.

The transportation cost bas gone up while the pockets of availability of the goods have been shrunk, she said.

She also said that this is not only for Bangladesh. The USA, Europe, England and the whole world are affected by the sanctions.

“People are the sufferers. The developed countries should specially think about it,” she said.

In this connection, she said that the US should understand that the sanctions are inflicting pain for their own people too. They also should look into the matter.

“You want to hurt a country by slapping sanctions. But how much are they affected?,” she questioned.

She said that the people of the other countries from low-income to developing and developed are much more affected by the restrictions.

She said the Ukraine war and the subsequent sanctions have hit Bangladesh just when it was just recovering from the adverse effects of Coronavirus pandemic.

“This is really a great challenge for us and it has to be overcome,” the PM said.

She also mentioned that the war should not prevent transportation of goods from one country to another and the international trading must continue uninterrupted.

She pointed that the supply of food is being greatly hampered by the sanctions and it is affecting many developed countries too.

She said that her government is trying to increase food production through optimum use of its arable lands to meet the domestic demand and help others too.

“But to boost the food production we need fertiliser, diesel and other related materials. We are not getting the inputs,” she bemoaned.

Turning to the Rohingya issue, the prime minister said that more than one million forcibly displaced Myanmar nationals are a huge burden for Bangladesh with a population over 16.5 crore.

The impact of coronavirus and the war already caused economic miseries even for the developed countries, at this time it is very much painful for Bangladesh to bear this extra burden.

“The world should realise this,” she said.

She urged the international community to be more active to ensure that the displaced Rohingyas return t to their homeland with dignity and get a better life there.

“They also have rights and I urge all to be more active regarding the matter,” she said.

Bangladesh Ambassador to Poland Sultana Laila Hossain and Japanese Ambassador to Bangladesh Ito Naoki were honoured with “Bangabandhu Medal for Diplomatic Excellence” for their significant contributions in diplomacy.

The charge d’affaires of Japan embassy in Dhaka received the award on behalf of ambassador Ito Naoki.

Momen, on behalf of the prime minister, handed over the medals to the recipients.

Ambassador Sultana has played an important role in dealing with exodus of hundreds of Bangladeshis in one of the largest migration crisis in Europe, following the war between Russia and Ukraine in February.

Ambassador Naoki was honoured for playing an important role in boosting bilateral relationship with Bangladesh on all fronts.

The awardees, connected to the programme virtually, expressed their appreciation for being honoured.

An audio-visual was played at the programme.

PM Hasina unveiled a book titled Bangabandhu Corners Around the World at the event.