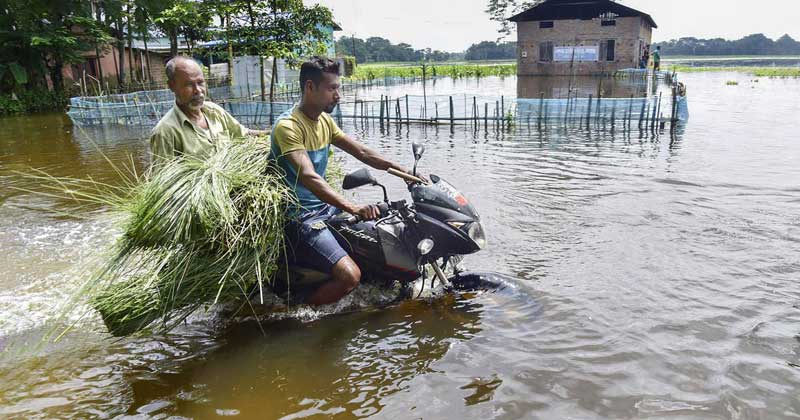 The toll due to floods and landslides in Assam rose to 101 on Wednesday as twelve more persons died in the state, PTI reported.

Four persons died in the Hojai district, three each in Barpeta and Nalbari and two in Kamrup, the state disaster management authority said. Four children were among the twelve who died on Wednesday.

The floods have also damaged 215 houses in seven districts. A total of 3,317,086 animals have been affected by the incessant rains, the state disaster management authority said.

Over the past two weeks, several regions of Assam have been cut off from the rest of the state and residents are facing shortages of food and water.

Chief Minister Himanta Biswa Sarma is slated to reach Silchar on Thursday to review the situation related to the floods. On Wednesday, he visited flood-hit regions of the Nagaon and Morigaon districts.

Sarma said that once the flood water recedes, the state will seek to find a permanent solution to floods in the area.

The flood situation began improving in some parts of Assam on Wednesday as the rains abated, The Indian Express reported. However, the town of Silchar in the Cachar district remained submerged, with several families marooned in waterlogged homes.

“The rest of the state is slowly coming back to the usual flood management mode,” GD Tripathi, chief executive member of the state disaster management authority. “However, Cachar continues to remain critical.”

About 40,000 residents have been affected by the floods in Meghalaya.