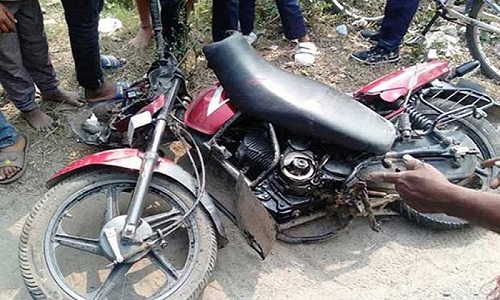 Three motorcyclists were killed in a road accident at Shantiganj upazila in Sunamganj  district on Wednesday night.

The deceased were identified as Hridoy Hossain, 20, son of Jalal Uddin, Layek Ahmed, 20, son of Angur Miah, and Jamil Miah, 20, son of Sadiqur Rahman. They all were residents of Kaitak village under Chhatak upazila in the district.

Locals spotted the bodies of the three friends lying on the ground on Sylhet-Sunamganj road in Noyagaon area at about 10:30pm.

The local people assumed that they might have been killed as an unidentified vehicle rammed into their motorcycle.

One killed in Sunamganj lightning strike

One electrocuted in Sunamganj