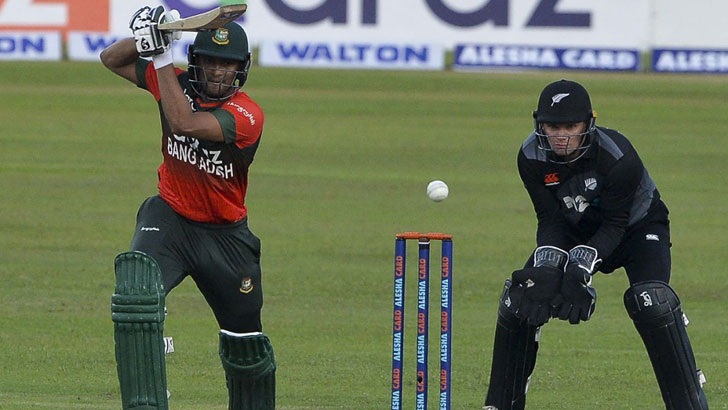 Bangladesh clinched the historic five-match Twenty20 International series against New Zealand, thanks to a sublime bowling effort of left-arm spinner Nasum Ahmed and pacer Mustafizur Rahman, who scripted the side’s six-wicket victory in the fourth game on Wednesday (Sept 8) at Sher-e-Bangla National Cricket Stadium at Mirpur in the capital.

Both of the bowlers claimed four wickets, with Nasum’s four for 10 being his career-best bowling. Mustafizur conceded just 12 runs in 3.3 overs for his four wickets.

The combined effort of the due dismissed New Zealand for just 93 in 19.3 overs but the victory of Bangladesh was not as clinical as it was anticipated.

The hosts had to play till the last over to confirm the victory with captain Mahmudullah Riyad slog-sweeping offspinner Cole McConchie for boundary to bring the score 96-4 in 19.1 overs.

Mahmudullah was not out on 43 off 48 with one four and two sixes and saved the side from the blushes which was on the cards after Ajaz Patel left Bangladesh reeling to 32-3 in sixth overs.

A third series victory before the Twenty20 World Cup was on the line as Bangladesh began the chase.

Bangladesh won the first two matches by seven wickets and four runs before tasting a 52-run to New Zealand in the third game.

Offspinner Cole McConchie broke through with the wicket of Liton Das for 6 and then Patel came into action, baffling the batsmen with simple but accurate bowling.

The lack of patience of Bangladeshi batsmen helped him when both Shakib Al Hasan (8) and Mushfiqur Rahim (0) played rash shot to be out in consecutive deliveries.

New Zealand sensed a chance but Mahmudullah Riyad ruined that. He firstly shared a 35-run partnership with Naim Sheikh and brought the side back on track.

Naim’s run-out dismissal for 29 runs again gave New Zealand a glimmer of hope. However Mahmudullah calmly drove the side to the victory.

For New Zealand, Will Young battled lonely to score 46 off 48, clobbering five fours and one six.

While Nasum sliced the top order of New Zealand, Mustafizur showed his magic in the death overs, denying the visitors go past 100 runs. This was the second time New Zealand being dismissed below 100, with their 60 in the first match remaining their joint lowest ever T20 International score.

After New Zealand opted to bat first, Nasum struck in the first over as Rachin Ravindra top-edged one to Saifuddin for duck. In his next over, he found extra bounce to get Finn Allen (12) who looked to be dangerous increasingly after reverse-swept Shakib Al Hasan for six.

But New Zealand found some hope when skipper Tom Latham and Will Young stabilized the innings, playing with caution that the pitch demanded.

After scoring 21, Latham was baffled by the sharp turn of offspinner Mahedi Hasan bowling and got dismissed. His dismissal ended a crucial 35-run partnership.

Nasum them came back to his second spell and demolished New Zealand completely with a double strike in consecutive deliveries, dismissing Henry Nicholls (1) and Colin de Grandhome for duck.

Will Young showed the maturity to carry the innings amid the wickets tumbling around him.

Mustafizur came up with his trademark cutter and slower to curb the aggression of the visitors. He firstly got the wicket of Tom Blundell (4) to start his venture and later cleaned up the tail with an intriguing show of death bowling.

His four wickets also included the prized scalp of Young who was dismissed in the last over.

Mohammad Saifuddin and Mahedi Hasan got the rest of the two wickets evenly.