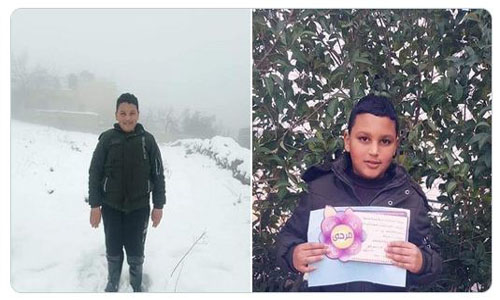 A Palestinian boy wounded by Israeli army fire in the occupied West Bank has died from his injuries, the Palestinian health ministry has said.

Mohammed al-Alami, 12, died in the town of Beit Omar, to the northwest of Hebron, after he was shot in the chest while travelling in a car with his father, the ministry said in a statement on Wednesday.

He is the second young Palestinian to die of wounds sustained by Israeli fire in days, reports Al Jazeera.

Nasri Sabarneh, mayor of the town, said the father was driving with his son and daughter when Mohammed asked him to stop at a shop to buy something.

The father made a U-turn, the mayor said, and Israeli troops nearby began shouting at him to stop. A soldier then opened fire at the vehicle, fatally shooting the boy in the chest.

Sabarneh said he knows the family, who lives in town, and had spoken to the father. The father and daughter were not hurt, he said.

The Israeli military is investigating the incident and had no immediate comment.

On Saturday a 17-year-old Palestinian died from wounds he received the day before. Mohammed Munir al-Tamimi, who suffered gunshot wounds, died in hospital, the Palestinian health ministry said, a day after violence in the flashpoint Palestinian village of Beita.

Hundreds of Palestinians had gathered on Friday afternoon in Beita, a hot spot in recent months, to protest the wildcat settlement of Eviatar, located nearby.

The clashes pitted Palestinians against Israeli soldiers and resulted in 320 Palestinians being wounded, according to the Red Crescent.

All Jewish settlements in the occupied West Bank are regarded as illegal by most of the international community.