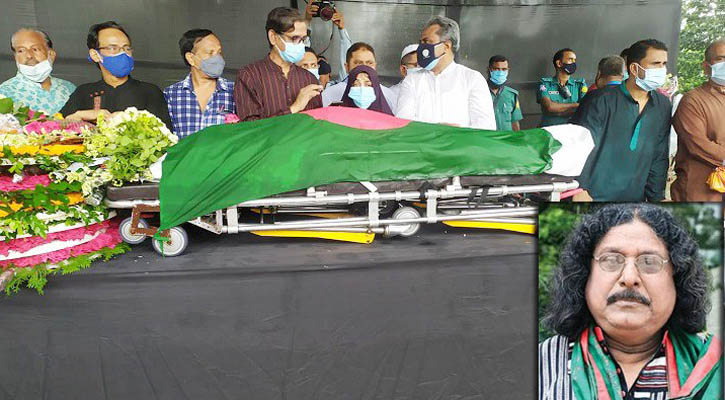 The first funeral prayers for the eminent folk singer was held at 11am at Pallima Sangsad premises in Khilgaon. There, he was given guard of honour.

Later, his body was taken to Central Shaheed Minar for the people from all walks of life to pay their last respect.

He was buried maintaining the health rules after second janaza at Khilgaon Matir Mosque in the capital after Zuhr prayers, Alamgir’s son Mashuk Alamgir Rajib confirmed.

Fakir Alamgir breathed his last at United Hospital around 11pm on Friday due to COVID-19 complications at the age of 71.

Alamgir, who was fully vaccinated against the disease, was diagnosed with the respiratory illness on July 14. He was hospitalised the next day due to breathing distress.

Fakir Alamgir was a folk and pop singer. After the Liberation War in 1971, he emerged as a Gono Sangeet (inspiration songs for the masses) singer. He was awarded Ekushey Padak in 1999. He started his music career in 1966. He played his role as a singer in 1969 uprising in East Pakistan. He worked with Swadhin Bangla Betar Kendra during the Liberation War.