Don’t fall into the nuclear family ‘parent trap’: What kids need most is love 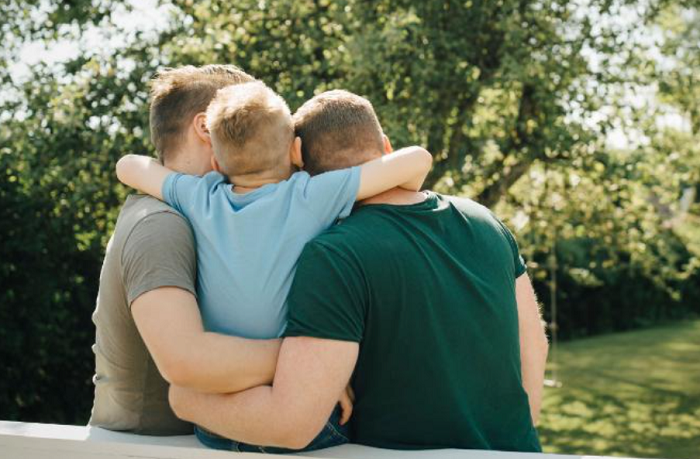 Food in their belly. A roof over their head. A reassuring hug after a tough day. An ear to listen to the latest thing that so-and-so said to so-and-so about such-and-such. These are the things our children need to thrive.

What doesn’t matter is the gender of the parent — or how many there are, for that matter.
“Some children have two mothers. Some children bunk with their cousins. So no matter whether you have a ma, a pa, a hog or this llama. … If you love each other then you are a family,” reads Suzanne Lang’s fun children’s book, “All Kinds of Families.”

One in four children do not have a father, according to US Census Bureau data. My child is one of them. Your default reaction may be sympathy, sadness or some misdirected judgment about what my child must be lacking. I’ll stop you right there.

My kid has two moms, and those are all the parents he needs. The same is true for many of the 19 million other children who don’t have a father active and supportive in their lives. They don’t need any displaced emotions, and they certainly don’t need anyone’s outmoded nuclear family expectations, questions or advertising.

White picket fences are overrated, and so are nuclear families. The truth is that dysfunction can seep into family life and impair a child’s development and well-being regardless of the family dynamic.

A two opposite-parent household is not inherently more emotionally stable than any other composure. The problem is that we’re still telling ourselves passe fables that 1950s TV mom June Cleaver is the role model when today’s superparent looks more like current, real-life gay TV host Andy Cohen.

It’s due time we change the narrative around default assumptions about what a child needs to thrive.

The predominant trope that every kid needs a mom and a dad is starting to shift, but we have just barely cracked open the door on our full acceptance and celebration of parents and caregivers of all colors and stripes.

Some 30% children in the United States are not living in two-parent households, according to the US Census Bureau. One might think that means that one-third of children are missing something fundamental when it comes to family support, but that is in many cases a myth that we perpetuate based on old notions of what makes a “healthy” family.

The only reason our children feel inadequate when they are not being raised in a nuclear family is because society tells them that their families are different or lacking, according to Sue West and Ken Knight from the Murdoch Children’s Research Institute, who co-authored a 2017 study in the Medical Journal of Australia.

If we could only embrace and celebrate all types of families, our children would be spared feelings of inadequacy.

“The family type that is best for children is one that has responsible, committed, stable parenting. Two parents are, on average, better than one, but one really good parent is better than two not-so-good ones. The gender of parents only matters in ways that don’t matter,” said Judith Stacey, a professor emerita of social and cultural analysis and sociology at New York.

Stacey found that children raised by same-gender parents do as well as those raised by two different-gender parent, according to her 2010 co-authored study in the “Journal of Marriage and Family.”

Economists Deni Mazrekaj, Kristof De Witte and Sofie Cabus, from the university KU Leuven in Belgium, used government data published in a 2019 study to track children born in the Netherlands, the first nation in the world to legalize same-sex marriage. And they found that children of same-gender parents actually fared better than their hetero counterparts.

Author Lang was inspired to write “All Kinds of Families” when her daughter started preschool.
“It was a book we wanted her to have but couldn’t find, something that reflected the different families we saw around us the way other books for the age group might present shapes or colors,” Lang said.

Lang isn’t the only author that has thoughtfully crafted inclusive family bedtime reads.
Some of our family’s favorites include “Love Makes a Family” by Sophie Beer, “All Are Welcome” by Alexandra Penfold and “The Family Book” by Todd Parr.

If only these books were required reading for everyone. That includes the guy at the mall who I overheard telling his kid that all families should have a mom and a dad. That goes for the 91% of all TV shows that don’t have LGBTQ characters or parents, according to LGBTQ media watchdog, GLAAD.

It especially includes the politicians that legislate against anyone who doesn’t fit that mold, whether single moms, same-gender two-parent households, blended families, families led by grandparents or other family members or any number of other configurations.

Still, the needle feels like it’s moving in the right direction, even if ever-so-slightly.
One example of the recent tick toward fuller family inclusion comes after more than a year of heightened trauma at the hands of Covid-19, which has taken the lives of more than 606,000 moms and dads, grandmas and grandpas, siblings and children, friends and co-workers and neighbors at the hands.

The pandemic may have rendered us all a bit more tuned in and that we should check our assumptions and reconsider our narrative. Brands are allowing people to opt out of Mother’s and Father’s Day marketing solicitations, acknowledging that blasting our inboxes with assumptions about our family dynamics, some of which may be inaccurate, is not the best tact.

What then do our kids need to thrive?

Kids need early education, according to Nonie Lesaux and Stephanie Jones, Harvard Graduate School of Education professors and developmental psychologists who published a 2018 study on the topic.

The World Health Organization says our children need “responsive care,” or decoding our children’s signals and responding to them. (No, that doesn’t mean you need to give your kid that chocolate bar they want for dinner.) It means listening to them when they express themselves, and ask questions that help them let them know we’re listening and want to understand them.

Kids need stability, security, emotional support and role models, according to Dr. Harley Rotbart, a parenting expert and vice chair emeritus of pediatrics at Children’s Hospital Colorado.
Of note, none of these qualities has anything to do with the number of parents or caregivers a child has, nor what the sexual or gender identity might be.

Indeed, parents and caregivers come in all shapes and creeds.

Moms might have penises. Dads might wear dresses. A kid might have two masculine-presenting moms who make really good milkshakes. Or one mom who works three jobs and one grandparent who greets the kid with cookies and milk after school. Or one dad who makes pancakes on Sunday mornings and reads bedtime stories. Or one nonbinary parent who paints with their children and reads Dr. Seuss with great enthusiasm.

The bottom line: It doesn’t matter what a parent’s background or identity is. What matters is that the parent knows how to kiss boo boos and wipe tears. A good caregiver supports and affirms, protects and empowers, no matter who they are or who their kids grow up to be.

We don’t need to have someone to give a Father’s Day card to in order to grow up to be happy and healthy. We don’t need to reflect “Leave it to Beaver” or have a heteronormative nuclear dynamic with 2.5 kids and a white picket fence for our kids to be fulfilled and lead successful lives.

Know about insomnia amid coronavirus pandemic