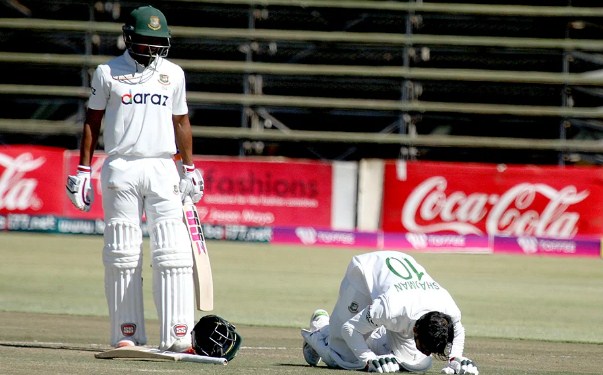 Bangladesh sniffed a victory in the one-off Test against Zimbabwe after setting the hosts an improbable 477 runs to win the match at Harare Sports Club.

The highest successful chase in the fourth innings remains 418 by West Indies against Australia. Zimbabwe’s own highest fourth innings total was 331, which they scored against New Zealand in 2011 in a losing-cause.

Shadman was not out on 115 off 196, hitting nine fours while Shanto remained unbeaten on 118 ball-117, which studded with five fours and six sixes as Bangladesh declared their second innings on 284-1.

Only two teams have got a bigger second-innings lead in Tests than Bangladesh’s 476, while losing one or no wicket in their second innings.

Opener Saif Hassan was the only dropped wicket after hitting 43 runs. He and Shadman shared 88-run for the opening stand after which Shadman and Shanto added an 196-run for an undefeated second wicket stand.

Resuming the day on 45 for no loss, Bangladesh batted fluently to keep Zimbabwe bowlers at bay with Shadman particularly treating the hosts with disdain.

Saif Hassan who was out on naught in the first innings also played his part well and looked set to reach his first half-century in Test cricket.

But he perished to a cut shot off pace bowler Richard Ngarava to be out on career-best 43 and his dismissal put an end to the 88-run partnership between him and Shadman.

But the arrival of Nazmul Hossain Shanto paced the scoreboard as Bangladesh showed their intent to bury Zimbabwe under huge score.

Shadman however glanced one towards fine leg for a single to reach his half-century off 101 balls.

He then matched with Shanto’s stroke-play to extend the agony of Zimbabwe bowlers further.

Shadman clipped Milton Shumba through mid-wicket for doubles to complete his maiden century off 180 balls.

Immediately after that Shanto punched the same bowler straight down the ground also for doubles to bring up his second century off 109 balls.

After their century, it was inevitable that Mominul Haque would declare the innings in a bid to give the bowlers enough chances to bowl out Zimbabwe.

Bangladesh compiled 468 in their first innings, thanks a career-best 150 not out off Mahmudullah Riyad after which Mehidy Hasan Miraz (5-82) and Shakib Al Hasan (4-82) shared nine wickets between them to wrap Zimbabwe first innings for 276.

Biden nominates Peter Haas as US ambassador to Bangladesh