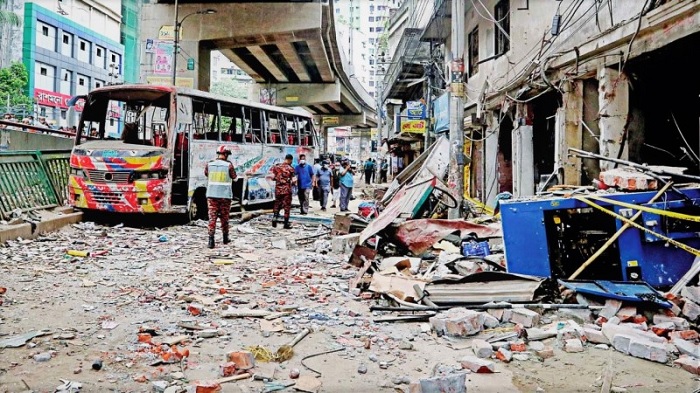 Two more victims, who received burns in massive explosion at Moghbazar in the capital on Sunday, died at the Sheikh Hasina National Institute of Burn and Plastic Surgery on Thursday– raising the death toll to 11.

Rasel used to work at a Bengal Meat outlet on the ground floor of the collapsed building. Hailed from Thakurgaon district, Rasel lived in a rented house at Moghbazar.

Nabi was a van driver and hailed from Rajbari district. He lived in a rented house at the capital’s Elephant Road.

Apart from the 11 dead, more than 60 people were injured after the powerful explosion ripped through the building on the Outer Circular Road near Moghbazar Wireless Gate on Sunday evening.

Several buses and adjacent buildings were damaged by the blast as well.

Ramna police early Tuesday filed a case over the explosion against several unidentified persons for causing death by negligence.

The unknown individuals could be anyone connected to the building, including its owner, tenants or utility people.

Investigators have yet to make any breakthrough in identifying the cause of the explosion even after site visits by different agencies, including police and Fire Service, over the past three days.

Two dead, at least two injured as truck fell off the road in Moulvibazar