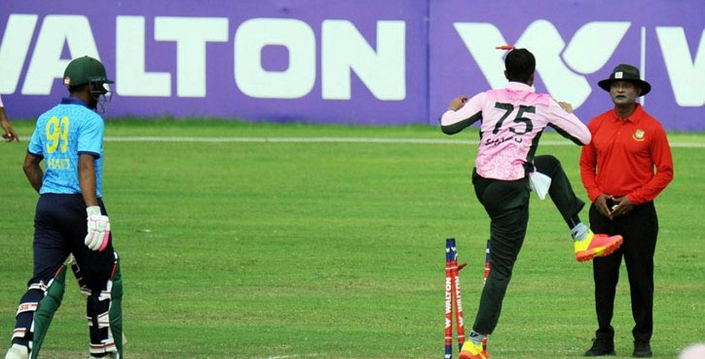 The Bangladesh Cricket Board (BCB) has banned ace all-rounder Shakib Al Hasan for four matches in Dhaka Premier League (DPL) for his unsporting behaviour towards the umpires during a DPL match.

”We have not got any official letter so far but we have learnt that the umpires committee have recommended four-match ban,” Masuduzzaman told Cricbuzz on Saturday.

”We will appeal to the board and ask them that they must dig the matter and see why Shakib was prompted to take such a step. Naturally, it was not acceptable but at the same time we have to find out why it happened,” he said.

Earlier on Friday afternoon, Mohammedan Sporting Club captain landed in hot water after losing his cool during the match between Mohammedan and arch-rival Abahani Limited.

The first incident took place when Shakib kicked the stumps in the fifth ball of the fifth over after his leg-before wicket appeal against Mushfiqur Rahim was turned down by umpire Imran Parvez.

Later, he lost his cool again as he uprooted the stumps out of despair after umpires called off the play at 5.5 overs due to rain interruption.

Shakib also gestured indecently pointing towards Abahani’s dressing room while returning back from the field after the game being stopped due to rain. Abahani coach Khaled Mahmud, who is also a director of BCB, was seen coming furiously towards him at that point but it did not turn ugly as batsman Shamsur Rahman came in between to cool things down.

Later, Shakib went to Abahani’s dressing room and resolved the matter before returning to the field when the game resumed.

Shakib, however, apologised for the misbehaviour on his Facebook page.