Mintu gets AL ticket for Dhaka-14, Habibur for Sylhet-3 and Hashem for Cumilla-5 to contest in 3 vacant seats 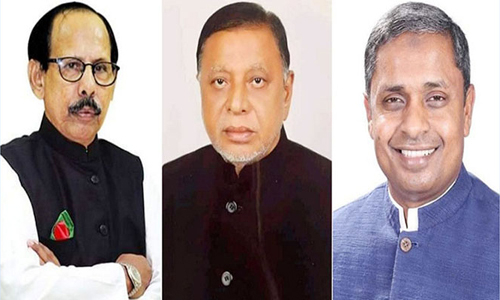 The Awami League has announced its candidates for the upcoming by-polls to the three vacant parliamentary constituencies Dhaka-14, Sylhet-3 and Cumilla-5.

Aga Khan Mintu has been picked as the party candidate for Dhaka-14, Habibur Rahman for Sylhet-3 while Abul Hashem Khan for Cumilla-5.

The decision was taken at a meeting chaired by Prime Minister Sheikh Hasina, also the president of the Awami League’s Nomination Board, on Saturday.

The deadline for submitting the nominations is June 15, according to the Election Commission’s schedule.

Voting will be held on July 28.

The three parliamentary seats became vacant due to the deaths of the respective lawmakers Sylhet-3 MP Mahmud Us Samad died on March 11, Dhaka-14 MP Aslamul Haque on April 4 and Comilla-5 MP Abdul Matin Khasru on April 14.