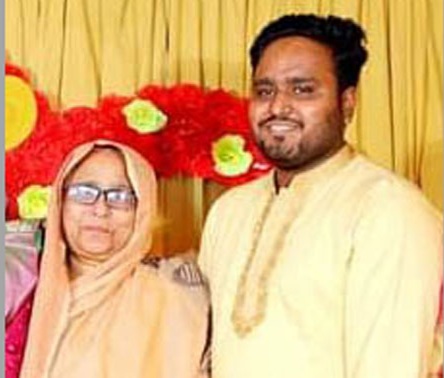 Even though Sohail Baksh, 32, was suffering from fever, cold, and diarrhoea for several days, he did not pay much heed to his illness at first. By the time he sought treatment, the coronavirus had already ravaged his lungs. He died on Sunday after being hospitalized for days.

The news of his untimely death cast a shadow of mourning over Rajnagar upazila in Moulvibazar. Shockingly, however, less than 12 hours after the death of her son, his grieving mother Dolbahar Begum ,72, also died of a stroke.

According to family members, Sohail did not seek any treatment despite having various symptoms including fever, cold and diarrhoea towards the end of Ramadan. He was, however, admitted to a hospital in Moulvibazar in mid-May when he started having breathing difficulties and was tested positive for Covid-19.

By that point, unfortunately, 80-85% percent of his lungs had already been damaged due to the coronavirus. Later, he was taken to Sylhet for treatment. After treatment there, he finally tested negative for Covid-19.

Within a couple of days, other family members — his father, mother, brother, and sister-in-law — also tested positive. Last Saturday, his family members were brought home from the hospital after receiving a negative report. Unfortunately, as the days went by, Sohail’s health was getting more and more critical. He was kept on life support.

The on-duty doctor of Sylhet Women’s Medical College declared him dead around 9:30am on Sunday. He was buried at the family graveyard at around 6pm the same day. Sohail was the proprietor of ‘Baksh Motors’ in Rajnagar Bazar.

Meanwhile, Dolbahar Begum, Sohail’s bereaved mother, could not bear the grief of losing her son. She died of a stroke at around 8:45pm. She too was buried at the family graveyard.

Sohail’s cousin Mustaqim Baksh Shimul said on Monday that the whole family was devastated by the news of his cousin’s death.

“My aunt had a stroke shortly after my cousin’s funeral was over in the evening. We did not even get a chance to take her to the hospital,” he lamented.

Man held for killing his nephew in Moulvibazar