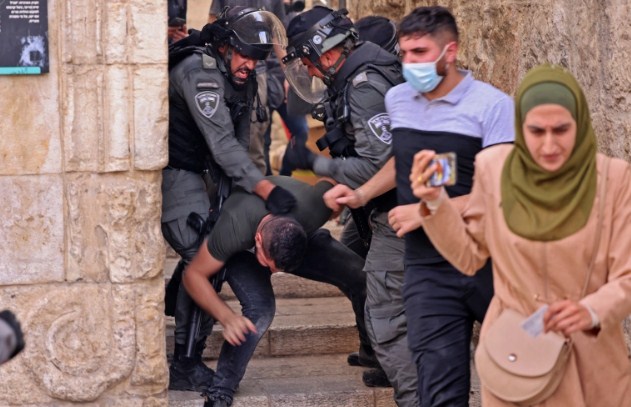 The Gaza health ministry said nine Palestinians were killed in Israeli air strikes in the Palestinian territory after the barrages against Israel.
The Israeli military issued no immediate comment on any action it had taken in the enclave.
Rocket sirens sounded in Jerusalem, in nearby towns and in communities near the Gaza minutes after an ultimatum from the enclave’s ruling Islamist Hamas group demanding Israel stand down forces in the al Aqsa mosque compound and another flashpoint in the holy city expired.
There were no immediate reports of casualties from the rocket fire in Israel, but local media reported that a house in the Jerusalem hills had been damaged, in the most serious outbreak of hostilities with Hamas in months.
Along the fortified Gaza-Israeli border, a Palestinian anti-tank missile fired from the tiny coastal territory struck a civilian vehicle, injuring one Israeli, the military said.
Hamas and the smaller Islamic Jihad militant grup claimed responsibilty for the rocket attacks. Israeli media reports said more than 30 rockets were fired.
“This is a message the enemy should understand well,” said Abu Ubaida, a spokesman for Hamas’s armed wing.
Share FacebookTwitterGoogle+ReddItWhatsAppPinterestEmail