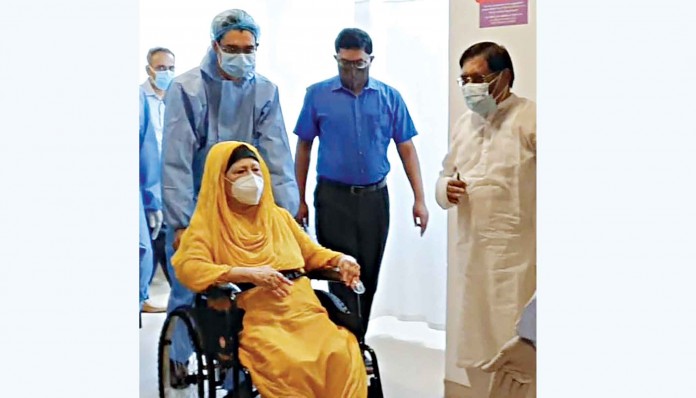 Though the health condition of BNP Chairperson Khaleda Zia improving slowly, she is still not out of danger due to various post-Covid complications, her medical board member Dr AZM Zahid Hossain said on Monday.
“There’s a slow improvement in her condition, it’s almost the same as it was yesterday (Sunday),” he told.
He said the BNP chief needs to stay at the Coronary Care Unit (CCU) of the Evercare Hospital for a few days more due to her post-Covid complications. “She’s still not out of danger.”
“A corona patient of this age like Madam (Khaleda) can suffer from various post-Covid complications. She has some other diseases which aggravated during her stay in jail for lack of proper treatment.”
Another member of the BNP chief’s medical team, wishing anonymity said, Khaleda’s saturation level has improved, but she is still given 1-2 litres of oxygen a day for avoiding any risk.
He also said fluids are still coming out of her lungs and it is a matter of concern.
The doctor hinted that Khaleda may be kept at the CCU of the hospital until her health condition improves significantly.
Meanwhile, BNP will hold a press conference on Tuesday on the government’s rejection to an application of Khaleda’s family seeking permission to send her abroad.
The party will present legal explanations on the matter and the instances of receiving treatment abroad by convicted people on different occasions since the independence of the country.
Talking to BNP standing committee member Gayeshwar Chandra Roy said the government has a taken a political decision, not a legal one, on Khaleda’s treatment abroad.
“It’s not a correct statement of the government that the convicted persons cannot go abroad. If this is the fact, how did a convicted Awami League leader go to Singapore for treatment in 2008?
On Sunday, the government turned down the application of Khaleda Zia’s family seeking permission to send her abroad for advance treatment, saying there is no scope for a convicted person to avail of such a scope.
On Wednesday, Khaleda’s younger brother Shamim Iskander met Home Minister Asaduzzaman Khan at his Dhanmondi residence and submitted the application to take Khaleda abroad for treatment.
The 76-year-old BNP chief, who tested positive for Covid-19 for the second time on April 24, was admitted to Evercare Hospital on April 27 for a thorough health checkup. She was shifted to the CCU of the hospital with shortness of breath on May 3.
On April 28, a 10-member medical board, headed by Prof Shahabuddin Talukder, was formed for the treatment of Khaleda at the Evercare Hospital a day after her admission there.
Khaleda Zia tested positive for Covid-19 on April 10 as eight people at her residence were infected with the virus. She underwent the second Covid-19 test on April 24 and her report was positive.
Meanwhile, Khaleda Zia tested negative for Covid-19 on Saturday, 27 days after she had been infected with the deadly virus.
Amid the coronavirus outbreak, the government freed Khaleda Zia from jail for six months through an executive order suspending her sentences on March 25 last year.
Share FacebookTwitterGoogle+ReddItWhatsAppPinterestEmail