50 years of Bangladesh’s independence : The handing over of the flag of the High Commissioner in London to Speaker Cllr Ahbab Hussain 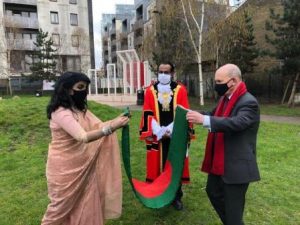 The handing over and hoisting of the national flag in East London on the golden jubilee of Bangladesh’s independence in London, United Kingdom has been completed with due dignity.
On the golden jubilee of Bangladesh’s independence at the Shaheed Minar premises in Altab Ali Park, East London, Bangladesh High Commissioner in London Syeda Muna Tasnim handed over the national flag of Bangladesh to Tower Hamlet Council Speaker Cllr Mohammad Ahbab Hussain and the flag was hoisted at the Shaheed Minar premises.
on Friday (March 26, 2021) organized by the London Bar of Tower Hamlets Council
Mr John Biggs, Executive Mayor of the London Bouragh of Tower Hamlets, and Sabina Akhtar, a leading member of the Arts and Culture Council, were among those who paid their respects at the Altab Ali Park shaheed Minar in London Fellowship
Share FacebookTwitterGoogle+ReddItWhatsAppPinterestEmail