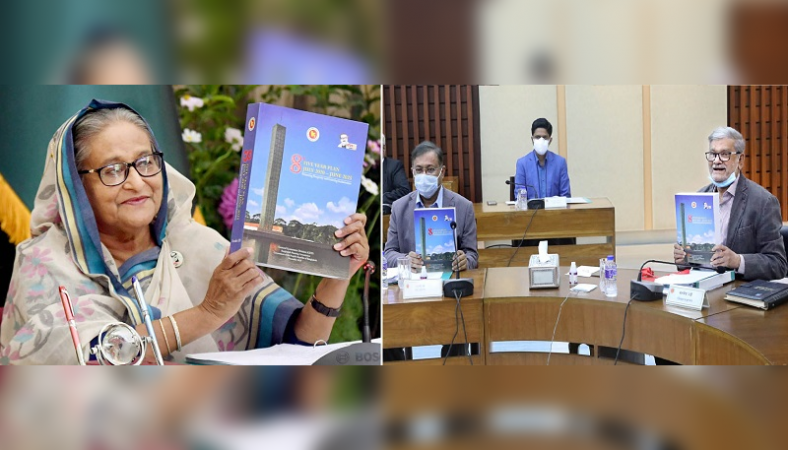 The approval came from the 22nd ECNEC meeting of the current fiscal year (FY21) held with ECNEC chairperson and Prime Minister Sheikh Hasina in the chair.

The premier chaired the meeting virtually from her official Ganobhaban residence while ministers, state ministers and secretaries concerned joined the meeting from the NEC Conference Room in the city’s Sher-e-Bangla Nagar area.

Briefing reporters after the meeting, Planning Minister MA Mannan said that a total of nine projects were approved today involving an overall estimated cost of Taka 19,844.57 crore. “Of the total project cost, Taka 6,599.88 crore will come from the government of Bangladesh while the rest Taka 13,244.69 crore as project assistance.”

Of the approved nine projects, six are new while three others are revised projects.

The planning minister said Prime Minister Sheikh Hasina in the meeting said once the SASEC corridor project is implemented, tolls will be realized.

She also suggested for keeping ‘earmark accounts’ in order to ensure necessary maintenance works of roads and highways.

Mannan said the perception and directive of the premier regarding tolls is that – “the day for delivering services free of cost is over”. This means the country’s people would have to come out from the culture of receiving services without paying any amount.

The prime minister also renewed her directive to realize tolls on the major highways.

Besides, she also ordered the Roads and Highways Department to construct necessary rest houses, coffee shops with wash rooms, changing rooms for women along the big highways like Dhaka-Chattogram and Dhaka-Sylhet roads.

The planning minister said the SASEC corridor will improve the country’s road connectivity with Nepal, India, Myanmar and China. “It’s very important that we’re looking towards the East internationally.”

The Roads and Highways Department under the Road Transport and Highways Division will implement the SASEC corridor project by December 2026.

Once the project is implemented, the road transport network of the country will be linked with the Asian highway network, BIMSTEC corridor, SAARC corridor, and regional road network.

The main objectives of the project are to upgrade the 209.328 KM Dhaka-Sylhet highway into four-lane alongside two service lanes on both sides of the highway for slow moving vehicles, straitening the existing curves of the highway, building necessary U-loops, intersections, and thus ensuring speedy and uninterrupted vehicular movement.

Mannan said at the very outset of the meeting, the Prime Minister unwrapped the cover of the final printed version of the 8th Five Year Plan.

He said the premier extended thanks to the officials concerned especially the Planning Commission for their role and activities to process the development projects during this COVID-19 pandemic.

Answering to a question, Mannan said the economic return of the SASEC project will be huge and each affected people for the project will get compensation.

He hoped that the project cost would be realized within 15 years after the start of collecting tolls.

Replying to another question, Planning Commission member Mamun Al Rashid said the per cubic meter construction cost under the SASEC corridor project would be less than the cost under Elenga-Katikumrul highway development project.