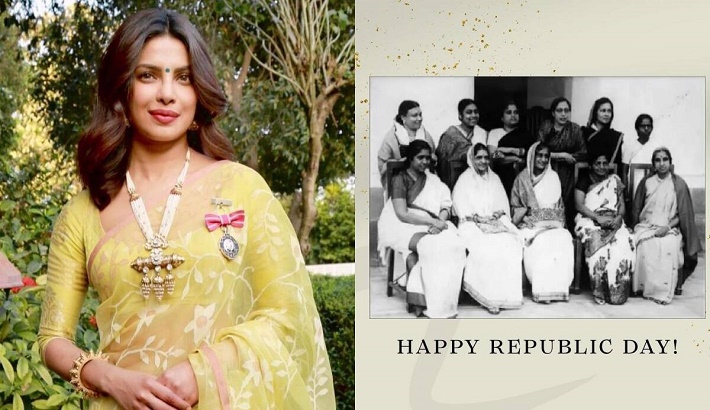 On the 72nd Republic Day, actor-film producer Priyanka Chopra Jonas took to Instagram to celebrate the 15 women who were a part of the first Constituent Assembly of India and helped draft the Indian Constitution.

The White Tiger actor shared the photos of Annie Mascarene, Vijaya Lakshmi Pandit, Kamla Chaudhry, Hansa Jivraj Mehta, Sarojini Naidu, Sucheta Kriplani, Begum Aizaz Rasul, Renuka Ray, Ammu Swaminathan, Malati Chaudhary and Rajkumari Amrit Kaur along with a caption that talked about women in governance.
Priyanka wrote, “I’ve been researching and reading a lot about women in governance across the world and how their skills have impacted communities and countries. It’s been enlightening, fascinating and so insightful to understand the importance of women in leadership. Happy Republic Day.”

On the work front, Priyanka Chopra was last seen in Ramin Bahrani’s The White Tiger. The actor is looking forward to the release of her memoir Unfinished in February.

Coronavirus: EU to tighten vaccine exports amid row with AstraZeneca