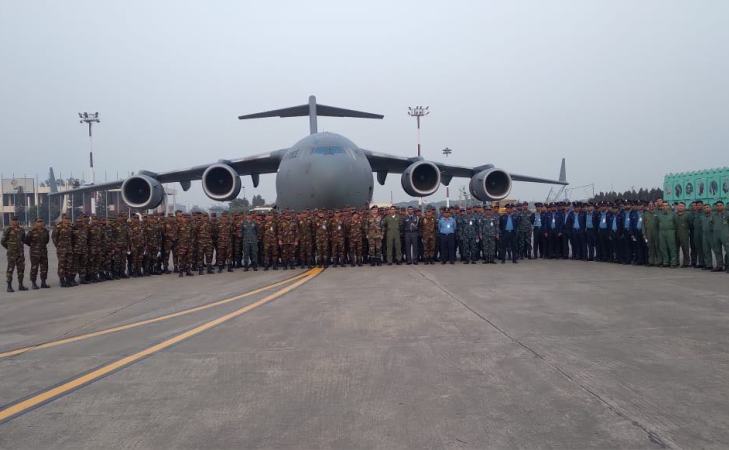 A contingent of 122 proud soldiers of the Bangladesh Armed Forces departed for India in a specially sent IAF C-17 aircraft on Tuesday.

The contingent will participate in India’s Republic Day Parade in New Delhi on 26 January 2021.
This is only the third time in India’s history that any foreign military contingent has been invited to participate in this National Parade at Rajpath in Central Delhi, Indian High Commission in Dhaka said on Wednesday

It is especially significant as the year 2021 marks 50 years of the Liberation War, through which Bangladesh emerged as a vibrant nation, free from the yoke of tyranny and oppression, it said.

The Forces which fought and bled together 50 years ago, will now proudly march down the Rajpath.

The Bangladesh contingent will carry forward the legacy of the brave Muktijoddhas, who fought for freedom, justice and their people.

A majority of the soldiers in Bangladesh contingent come from the most distinguished units of the Bangladesh Army, comprising of 1,2,3,4,8,9,10 & 11 East Bengal Regiments and 1,2 and 3 Field Artillery Regiments, who have the distinct honour of fighting and winning the 1971 Liberation War.
The Parade will be broadcast live, worldwide, on January 26, 2021.