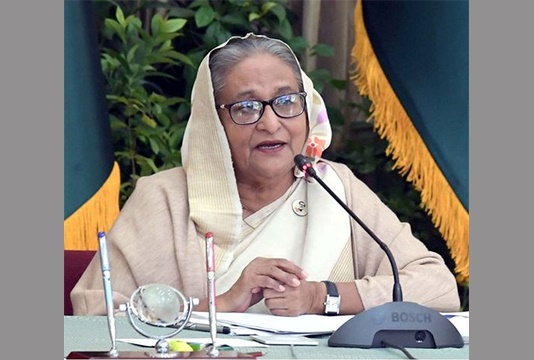 Prime Minister Sheikh Hasina on Tuesday said Awami League (AL) has empowered people bringing back continuation of democracy by ending the conspiracy and military dictatorship that has reached country’s development into momentum.

“No consistency of democracy was in the country rather politics of conspiracy, killing, coup etc was initiated and military dictators came to power one after another that halted the development activities,” she said.

The premier made this remark at a meeting of the National Economic Council (NEC) joining from her official residence Ganabhaban in the capital.

The meeting was held at NEC Conference Room in city’s Sher-e-Bangla Nagar to clear the 8th Five Year Plan for 2021-2025.

Sheikh Hasina said “We have been able to bring the power back to people’s hands and they are now enjoying their democratic rights, resulting in reaching development spree in the country into momentum and mass people are getting its benefit.”

She said the government has been working to materialise the dream of Father of the Nation Bangabandhu Sheikh Mujibur Rahman by turning Bangladesh into a poverty and hunger free country adopting long-term plans such as five year plan, perspective plan.

“It was not only shameful for me but also for the whole nation that once many across the world used to see Bangladesh which was running seeking assistances . . . but now we are moving towards a poverty and hunger free nation and our country has attained a dignified position globally,” she said.

The Prime Minister said Father of the Nation Bangabandhu Sheikh Mujibur Rahman in 1973 formulated first Five-Year Plan (FYP) for 1973-78 period to make the country happy and prosperous one, but he did not get time to implement it as the assassinators killed him with most of his family members in 1975.

Later, the country faced irony as the people, who came to the power after 1975 violating the constitution, did not adopt and implement any long term plan, she said.

Sheikh Hasina said Awami League (AL) after coming to the power in 1996 framed the 5th FYP because no country could become developed one without the FYP.

“We had proven that the country moved towards development and people received its benefit when a long-term plan was taken,” she said.

Coming to the power in 2001, BNP again took short-term plan instead of FYP, she said, adding AL won the election in 2008 and formed the government in 2009 and it not only framed the 6th FYP but also adopted a Perspective Plan for 2010-2020 period by setting a target to pull the country to developing one.

“The government meanwhile formulated another Perspective Plan 2021-41 and Delta Plan 2100 to steer the country towards developed one”, she went on saying.

“Few more five year plans would be required to implement the country’s development agendas in phases during 2021-41,” she noted saying that whoever is in power if the plans are implemented Bangladesh will become a developed country.

The premier said the government reduced poverty rate and increased growth rate as well as complied with all criteria for graduation from the Least Developed Countries following the direction of Bangabandhu that he gave during his three and half years period after the independence.

Referring to the present scenarios rendered by the Covid-19, she said not only Bangladesh but also the entire world is in standstill because of the virus attack.

“But, we have been able to keep running our economic activities, even in limited scale, and trend of development when the world has become standstill,” she said.

Coronavirus infection: Should you wear a face mask at home?