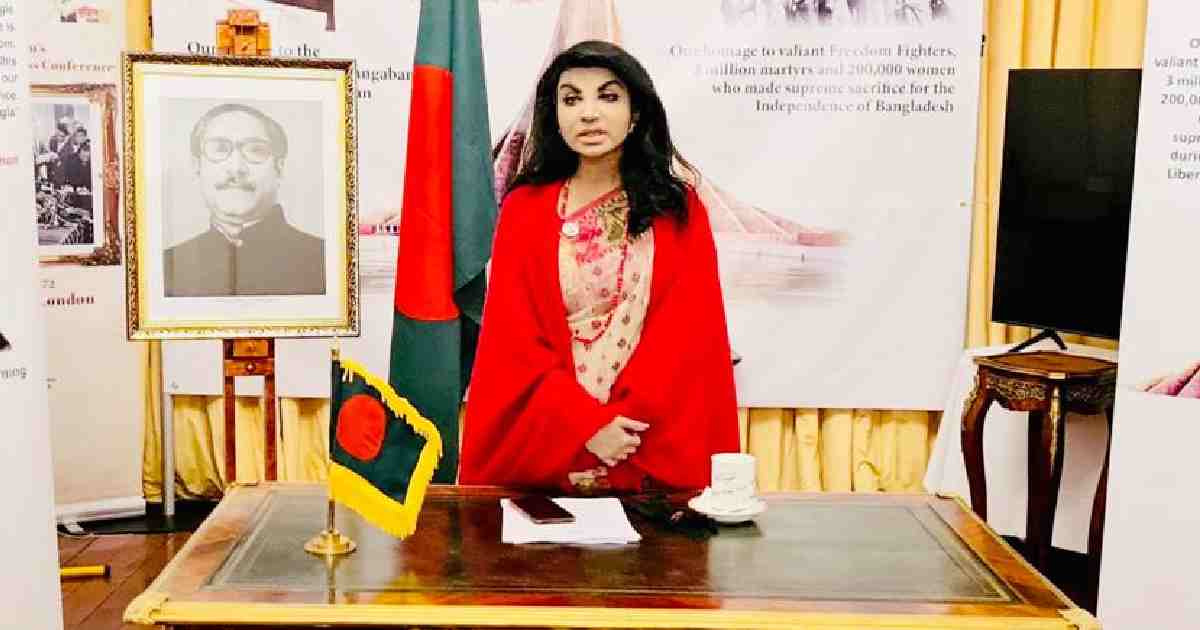 They also paid deep homage to the martyrs, biranganas and the valiant freedom fighters of 1971 War of Liberation.

Chaired by High Commissioner of Bangladesh to the UK and Ireland Saida Muna Tasneem, the meeting was participated by Chair of All-Party Parliamentary Group (APPG) on Bangladesh and UK’s Trade Envoy for Bangladesh Rushanara Ali, MP, Vice-Chair of the APPG on Bangladesh and Conservative Friends of Bangladesh, Bob Blackman, MP, High Commissioner of India to the UK Gaitri Issar Kumar, Non-resident Ambassador of Bhutan to UK Tenzin R. Wangchuk, Director for South Asia and Afghanistan at the UK Foreign, Commonwealth & Development Office Gareth Bayley, Oxfam’s Special Representative in 1971, Julian Francis OBE, leading Bangladeshi-British organiser of 1971 liberation war movement in the UK Sultan Mahmud Shariff, Community representative Syed Sajidur Rahman Faruk and valiant freedom fighter Luqueman Hussain. Hundreds of expatriate Bangladeshis from the UK and Ireland joined the celebration paying their tribute to the Father of the Nation and homage to the martyrs and freedom fighters of 1971 War of Liberation. 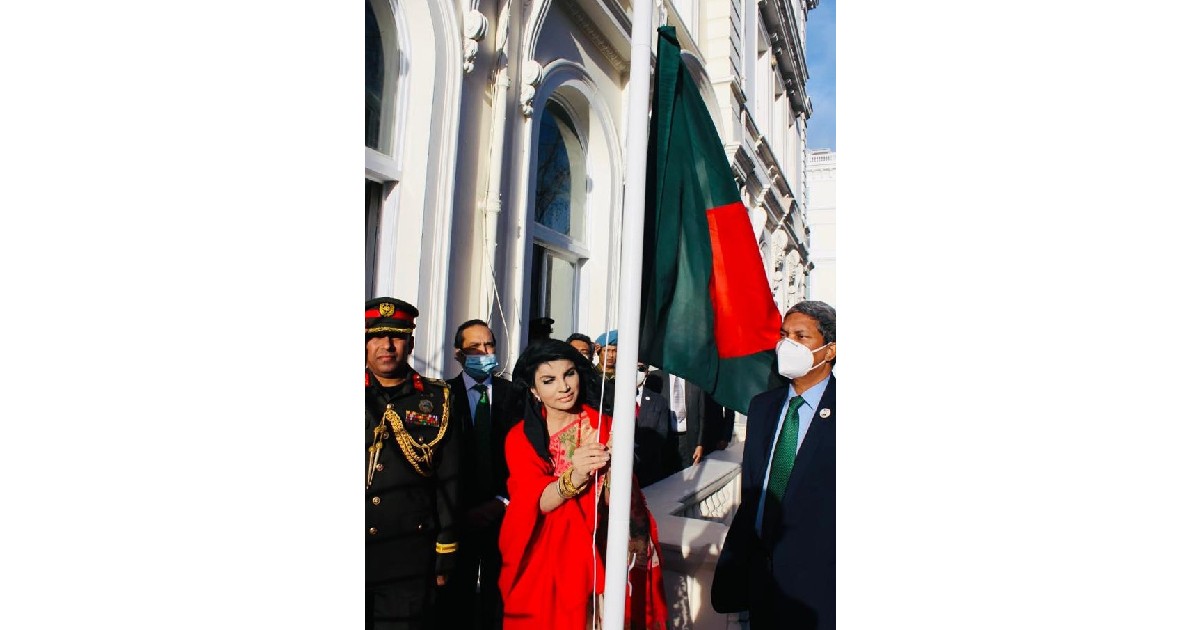 Paying respects to Bangladesh’s Father of the Nation, Rushanara Ali MP said, “I am proud of the fact that I was born in Bangladesh and came to the UK at the age of seven, and take pride in today’s Bangladesh that has achieved tremendous socio-economic prosperity despite Covid pandemic and leadership in disaster management and climate-resilient under Prime Minister Sheikh Hasina.”

He congratulated Prime Minister Sheikh Hasina for the ‘spectacular 5.21 percent economic growth even in a post-pandemic challenging world.

As a close aide to India’s former President Pranab Mukherjee, High Commissioner Kumar recalled that in June 1971 Mukherjee moved a resolution at the upper house of the Indian Parliament to recognise the provisional government of Bangladesh at Mujib Nagar, and was instrumental to Indira Gandhi’s campaign with European leaders to ensure Bangabandhu’s release from wartime imprisonment in Pakistan.

People of India would like to see an ever stronger, prosperous and peaceful Bangladesh, a nation that would remain true to the ideals of Bangabandhu, said the High Commissioner.

Ambassador Tenzin R. Wangchuk of Bhutan recalled Bhutan’s 3rd King Jigme Dorji Wangchuk’s visit to Bangladesh refugee camps in Kolkata during the 1971 War and his door-to-door campaign to raise funds for humanitarian support to Bangladeshi refugees and decided that Bhutan would be the first country to recognise Bangladesh on 6 December, ‘71. 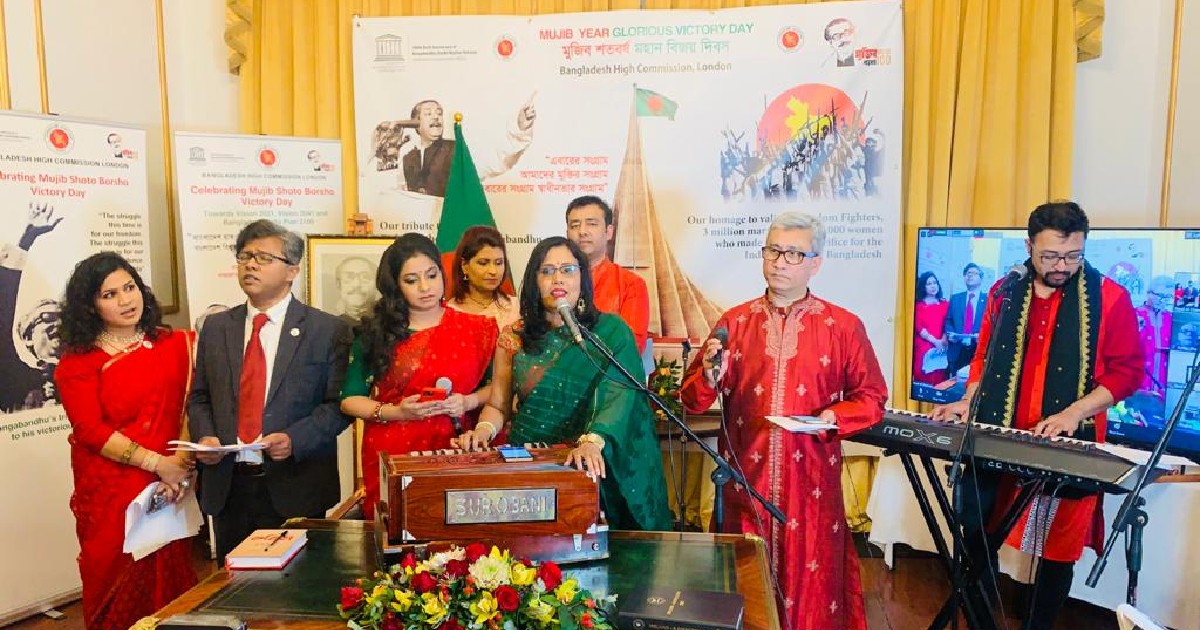 High Commissioner Saida Muna Tasneem, paying homage to the Father of the Nation and valiant freedom fighters and martyrs of 1971 said Bangabandhu and the Martyrs of 1971 made supreme sacrifices to gift the generation a sovereign People’s Republic of Bangladesh free from religious exploitations of an Islamic Republic of Pakistan.

“It is now our turn to protect those fundamentals of Bangabandhu’s 1972 Constitution-Democracy, Secularism, Bengali Nationalism and Social Justice, as based on these principles, Bangabandhu’s visionary daughter Prime Minister Sheikh Hasina continues to take Bangladesh to unprecedented heights of growth and prosperity even in post-Covid,” she said.

The High Commissioner called upon young British-Bangladeshis to uphold the secular, progressive and pluralistic values of the 1971 War of Liberation and Bangabandhu’s Bengali Nationalism, and reject religious extremism and radicalisation.

Referring to the historic photograph of Bangabandhu with British Prime Minister Edward Heath at the Bangladesh Foreign Office, UKFCDO’s Gareth Bayley said, this photograph symbolises the historic relations between Bangladesh and the UK, which will be witnessing its golden jubilee of diplomatic relations in 2021.

Former Oxfam’s Special Representative Julian Francis recalled the perpetrators of Bengali people, who compelled them to flee to India where he provided humanitarian assistance.

A documentary on the epic liberation war of Bangladesh was screened and a colourful cultural show titled ‘Bangabandhu Birth Centenary Victory Day Ensembles’ was performed by expatriate artists.

Earlier in the morning, the celebration of the day commenced with hoisting of the national flag by the High Commissioner at the Chancery premise.

Afterwards, a special prayer was offered for eternal peace of the departed souls of the Father of the Nation, and martyrs of the Liberation War and messages of the President and Prime Minister were read out.