Could cold water hold a clue to a dementia cure? 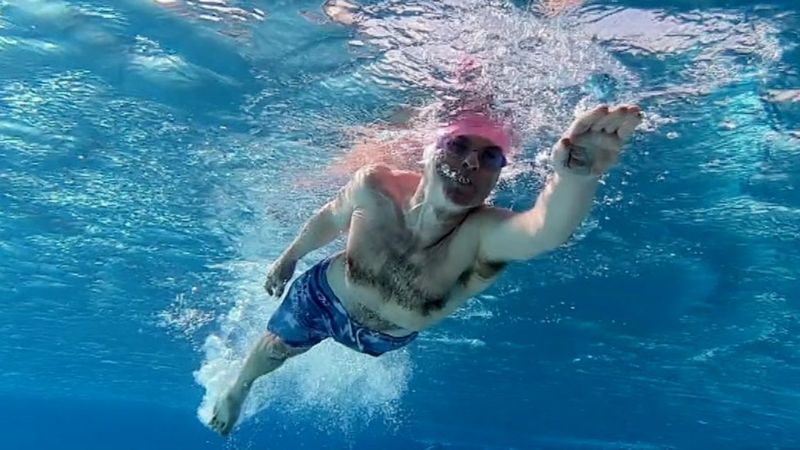 Cold water swimming may protect the brain from degenerative diseases like dementia, researchers from Cambridge University have discovered.

In a world first, a “cold-shock” protein has been found in the blood of regular winter swimmers at London’s Parliament Hill Lido.

The protein has been shown to slow the onset of dementia and even repair some of the damage it causes in mice.Prof Giovanna Mallucci, who runs the UK Dementia Research Institute’s Centre at the University of Cambridge, says the discovery could point researchers towards new drug treatments which may help hold dementia at bay.

The research – although promising – is at an early stage, but it centres on the hibernation ability that all mammals retain, which is prompted by exposure to cold.

There are already more than a million people with dementia in the UK and the total is expected to double by 2050.

Researchers are searching for new ways to treat the condition, as current options have only limited impact.

Bears and hedgehogs
Doctors have known for decades that cooling people down can – in certain circumstances – protect their brains.

People with head injuries and those who need cardiac operations are often cooled during surgery, as are babies.What has not been so well understood was why cold has this protective effect.

The link with dementia lies in the destruction and creation of synapses – the connections between cells in the brain.

In the early stages of Alzheimer’s and other neuro-degenerative diseases, these brain connections are lost.

This leads to the cascade of symptoms associated with dementia – including memory loss, confusion and mood swings – and, in time, the death of whole brain cells.

What intrigued Prof Mallucci was the fact that brain connections are lost when hibernating animals like bears, hedgehogs and bats bed down for their winter sleep.

About 20-30% of their synapses are culled as their bodies preserve precious resources for winter.

But when they awake in the spring, those connections are miraculously reformed.
They proved the link in a separate experiment which showed brain cell deaths in Alzheimer’s and prion disease could be prevented by artificially boosting RBM3 levels in mice.

It was a major breakthrough in dementia research, and their findings were published in the scientific journal Nature.

Winter swimmers
Prof Mallucci believed a drug which prompted the production of RBM3 might help slow – and possibly even partially reverse – the progress of some neuro-degenerative diseases in people.

RBM3 had not been detected in human blood, so the obvious next step was to find out whether the protein is present in the human population.

In an interview on the BBC Radio 4 Today Programme, Prof Mallucci explained that she would like to test the role of RBM3 in humans – but that ethical guidelines would make it very hard to get permission to make people hypothermic.

Step forward Martin Pate, one of a small group who swim throughout the winter at the unheated open-air lido on Hampstead Heath in London.

He and the other swimmers voluntarily made themselves hypothermic on a regular basis he told her in an email, and would therefore be ideal subjects of a study.

Prof Mallucci agreed, and during the winters of 2016, 2017 and 2018, her team tested for the protein in winter swimmers.

The researchers used members of a Tai Chi club who practise beside the pool but never actually swim, as a control group.

The Cambridge team found that a significant number of the swimmers had markedly elevated levels of RBM3.

All of them become hypothermic, with core temperatures as low as 34C.

None of the Tai Chi group showed an increase in RBM3 levels or experienced these very low body temperatures.

Could cold slow dementia?
The Cambridge work on winter swimmers has been shared in online lectures but has not yet been published in a scientific journal.

A number of other researchers have found similarly higher levels of RBM3 in babies and heart and stroke patients who have been made hypothermic.

What these findings show, says Prof Mallucci, is that – just like hibernating mammals – human beings produce the “cold-shock” protein.

But the risks associated with getting cold outweigh any potential benefits, so cold water immersion is certainly not a potential dementia treatment, she says.

The challenge now, she says, is to find a drug that stimulates the production of the protein in humans and – more important still – to prove it really does help delay dementia.

Dementia is predominantly a disease of the old, so even a relatively short delay in the onset of illness could have huge benefits for individuals, and the wider population.

Prof Mallucci says: “If you slowed the progress of dementia by even a couple of years on a whole population, that would have an enormous impact economically and health-wise.”

The virus won’t stop evolving when the vaccine arrives