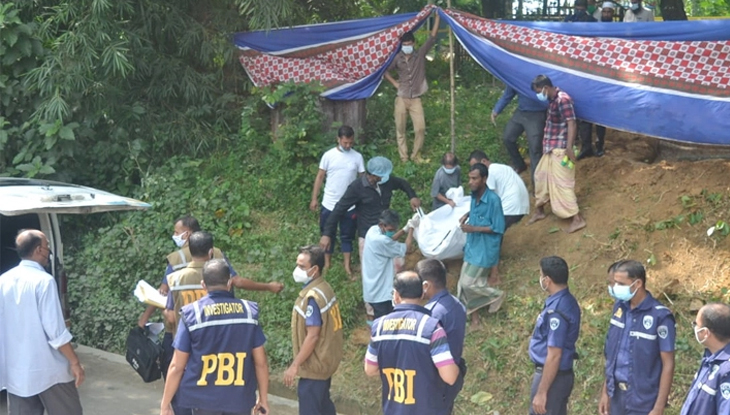 The body of young man Raihan Uddin who was reportedly tortured to death in police custody in Sylhet was exhumed on Thursday morning for further autopsy.

The body was dug out from the grave in Akhalia of the city around 10am at the presence of district administration executive magistrates Sajib Ahmed and Mejbah Uddin.

Investigation officer of a case filed over the incident Mahidul Islam of the Police Bureau of Investigation and councillor from ward-9 of Sylhet City Corporation Mokhlisur Rahman Kamran were also present.

Earlier on Wednesday, a Sylhet court ordered the exhumation of the body of the young man for further autopsy.

Raihan, son of late Rafiqul Islam of Akhalia in Sylhet city, died at the hospital on October 11.

Bandarbazar Police Outpost informed on the day that he was severely injured in a mass beating at Kastghar in the city during a mugging. They rescued him and took him to the hospital where he succumbed to his injuries.

However, there were injury marks on different parts of the body of the victim and the nails of his fingers were also uprooted which suggested that he was tortured.

It was alleged that Raihan was tortured to death at the police outpost for bribe money.

Meanwhile, four policemen, including in-charge of the outpost sub-inspector Akbar Hossain Bhuiyan, were suspended and three others withdrawn over the incident.

Raihan was buried following a namaz-e-janaza on September 11 night.

However, police filed a petition before the court seeking its order to exhume the body to know the actual reason behind the death.

5 to die in Tangail gang-rape case