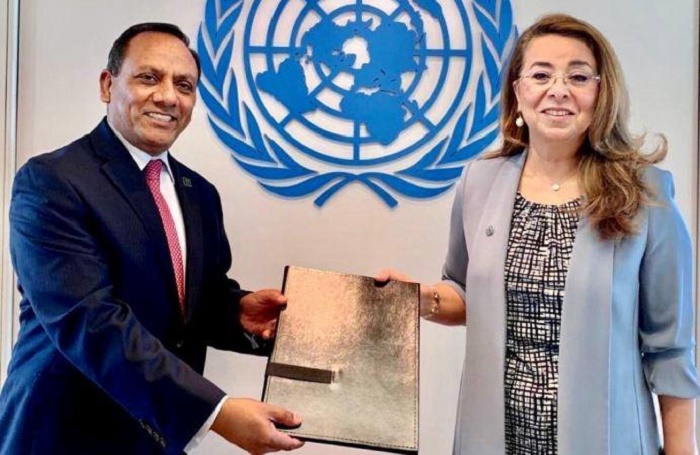 Permanent Representative of Bangladesh in Vienna Ambassador Muhammad Abdul Muhith presented his credentials to the Executive Director of the UN Offices in Vienna (UNOV) and Director-General of United Nations Office on Drugs and Crime (UNODC) Ms Ghada Fathi Waly on Tuesday at the UNOV Headquarters in Vienna, Austria.

Ambassador Muhith was accompanied by the Deputy Chief of Mission Rahat Bin Zaman to the ceremony.

While accepting the credentials, the ED, UNOV and DG, UNODC welcomed Ambassador Muhith in Vienna and wished him success in discharging his responsibilities.She expressed her satisfaction at the increase of UNODC projects and activities in Bangladesh specially in the areas of tackling transnational crime, countering the drug problems, combating terrorism, among others.

She also discussed the current status and future plans for UNODC projects in Bangladesh including the GLO.ACT (Global Action to Prevent and Address Trafficking in Persons and the Smuggling of Migrants) Initiative, Universal Family Skills programme, and proposed UNODC-UNHCR project on research in drug and crime matters. 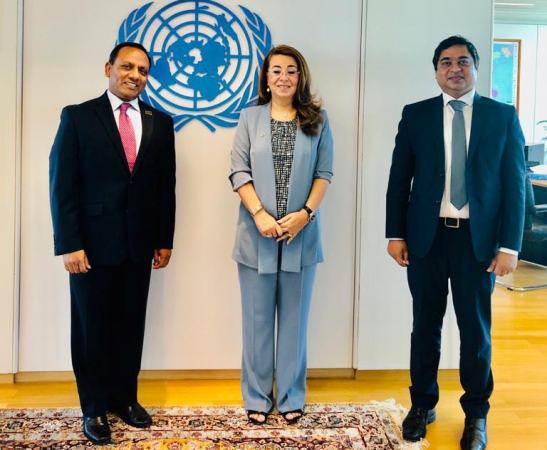 The Director-General also appreciated Bangladesh’s remarkable socio-economic progress in recent times and assured the Government of Bangladesh of UNODC’s support and cooperation in the days to come.

Ambassador Muhith thanked the ED, UNOV for accepting his credentials and informed the commitment of Bangladesh to uphold multilateralism in order to find global solutions to the global problems like drugs, trafficking in persons, cybercrime and so on.

He briefed her of the policy of zero-tolerance to terrorism and extremism by the government of Bangladesh, under the leadership of Prime Minister Sheikh Hasina.The Ambassador also thanked the DG and staff members of UNODC for the growing support and cooperation extended to Bangladesh and expressed his sincere desire to expand Bangladesh’s engagement with the UNODC and other UN offices in Vienna in the coming years.

Ambassador Muhith also extended an invitation to Ms Waly to visit Bangladesh at a mutually convenient time in not too distant future.