A further nine people have died after contracting coronavirus in the UK, bringing the overall death toll to 46,210.

According to the latest figures, 305,623 have tested positive for Covid-19, with 938 additional cases recorded in the past 24 hours.

The numbers released by the Government cover fatalities in all settings, including hospitals, care homes and the wider community.

Today’s figure is up one from the eight new deaths recorded yesterday.

Earlier the NHS said that a further five people who tested positive for coronavirus have died in hospitals in England, bringing the total number to 29,352.

Patients were aged between 66 and 95 years old. All had known underlying health conditions, the NHS said.

Scotland is now approaching three weeks without a coronavirus death after none were recorded for the 18th day in a row, Nicola Sturgeon said.

The First Minister gave the latest figures at the Scottish Government’s daily coronavirus briefing in Edinburgh.

She said 11 of these were in the Grampian area, though she could not say if these were linked to an outbreak in Aberdeen.

There were 265 people in hospital with confirmed Covid-19 in Scotland, this hasn’t changed since the previous day. Of these, three were in intensive care.

Numbers released on Mondays are often lower than the reality due to delays in reporting over the weekend. Only seven deaths were recorded last Monday but the figures soared on Tuesday to 119.

There were no new deaths recorded in Northern Ireland or Wales, according to the latest figures.

Public Health Wales said cases have increased by 24 to bring the total to 17,339. The number of positive test results in Northern Ireland has risen by 40 to 5,988.

It comes as the debate over how to reduce the likelihood of a deadly second wave of infections continues. 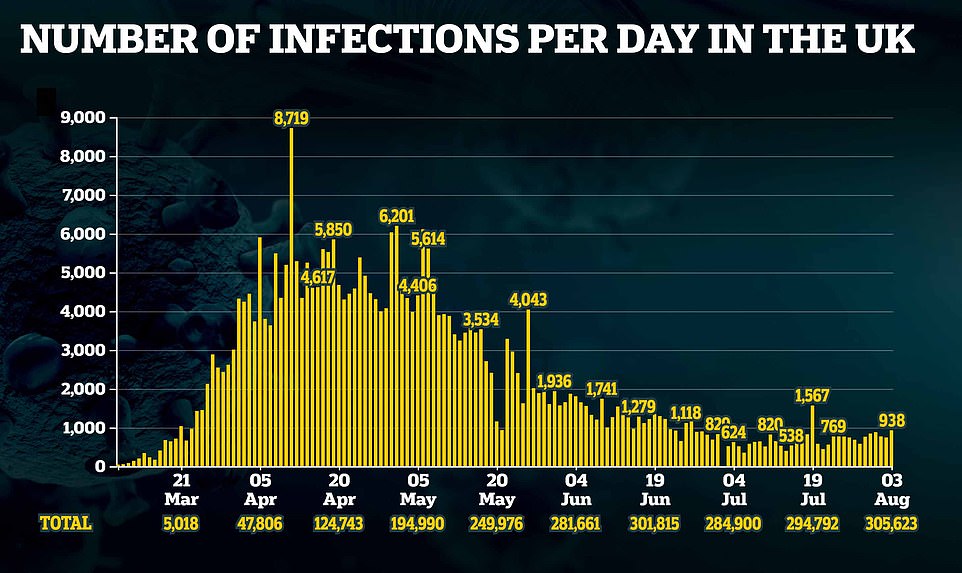 A major incident has been declared in Greater Manchester due to infection rates rising fast in a number of different areas. Households in parts of north west England and Yorkshire have not been allowed to meet indoors since Friday.

Meanwhile, plans to lock down the whole of London if infections rise again have been dismissed as ‘speculation’ by Downing Street.

Reports at the weekend claimed the M25 could be used as a border around the city with no one allowed to go in or out.

Analysis of the death toll in Spain has found there could have been 16,000 more fatalities than the Government has so far announced.

The Spanish Health Ministry says 28,432 people have died but it only includes cases where someone has tested positive.

The official tally is widely suspected to underestimate the true count by omitting a large number of deaths earlier in the outbreak, when the virus had caught European governments off-guard before they had a chance to ramp up testing capacities.