Abdul Hafiz of Sylhet elected mayor of the Council of UK 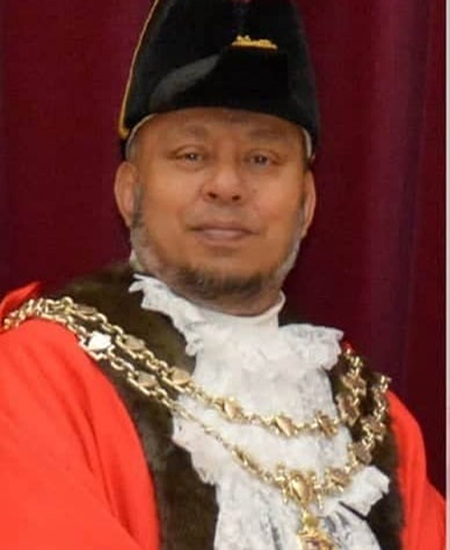 Abdul Hafiz Jewel of Balaganj district in Sylhet has been elected Mayor of Maldon Town Council in Essex County, UK. He was elected mayor on Monday (July 21st) at the council’s annual general meeting. He had previously served as Deputy Mayor in 2017-18.

Abdul Hafiz Jewel is a descendant of Sirajpur village in Dewan Bazar union of Balaganj upazila.. His father’s name is Abdul Jabbar and his mother’s name is Ashabun Nesa. Abdul Hadi and Sharmin Begum, the father of two children, have been involved in various social organizations and institutions at home and abroad. His wife Shamima Begum is the ‘Mayornes’ of Maldon Town Council.

Abdul Hafiz Jewel was born on 8 January 1973. He first moved to the UK with his parents in 1975 but has been living there permanently since 1989. While in the country, he studied at the traditional Dewan Abdur Rahim High School in Balaganj till the class X. He then returned to the UK and complete ‘A’  level at Chamsford College.

Abdul Hafiz Jewel was elected as the second term councilor in May last year (2019) and last elected as the mayor on July 20 this year. He was elected councilor for the first time in the 2015 Maldon Town Council election in Essex County. He served as the Deputy Mayor of the Council in 2017-2018 and before that also served as the Finance Chairman (General) of the Council.
Abdul Hafiz Jewel was elected vice president of the Maldon District Islamic Cultural Association in 2004. He has been the President of the Association since 2012. He is one of the founding members of ‘Probasi Gaharpur Bhaban’ of Dewan Abdur Rahim High School and College in Balaganj.
He is also involved with various social organizations, educational institutions and religious organizations in the country and abroad including Probasi Balaganj Osmaninagar Education Trust, Probasi Balaganj Osmaninagar Upazila Adarsh Samiti, Dewan Abdur Rahim High School and College Development Committee UK, Gaharpur Madrasabazar Unnayan Samiti UK.
Meanwhile, Abdul Hafeez Jewel thanked all the members of the council for electing him as councilor and mayor and sought their cooperation in discharging their responsibilities.
Share FacebookTwitterGoogle+ReddItWhatsAppPinterestEmail