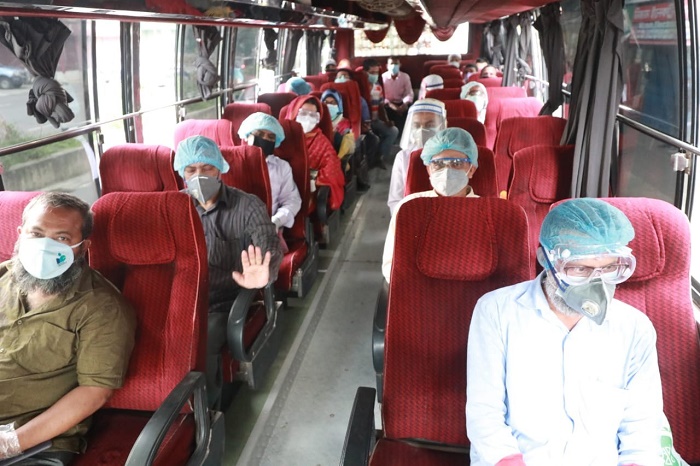 Movement of long-route buses and other vehicles resumed on highways on Monday morning after about two months’ suspension to combat the spread of the COVID-19 disease.

Witnesses said inter-district passenger buses have been leaving different bus terminals in the city keeping up to 50 percent of their seats empty as per the government directive to maintain social distance but the number of passengers was very thin.
Traffic Inspector (TI) Akhter Hossain of Uttara Traffic Division under Dhaka Metropolitan Police (DMP) said a number of busses have been leaving Abdullahpur bus stand for different destinations since early morning .

All of the buses that left Abdullahpur bus stand kept 50 percent of their seats vacant but a small number of passengers are travelling ,Akhter Hossain said.

All the buses were seen maintaining the health guidelines before leaving the terminal, he said.

Akhil Ahmed, a counterman of Hanif Paribahan at Mirpur Technical bus counter, told UNB that a number of buses have left the counter for different districts with a low number of passengers in the morning.

Replying to a question, he said they are taking extra 60 percent fare from each passenger and also keeping 50 percent seat empty as per the government’s order alongside maintaining other health guidelines.
The government declared general holidays from March 26 and suspended mass transport to tackle coronavirus outbreak and later the suspension was extended till May 30 in several phases.

George Floyd death: Violence erupts across US on sixth day of protests