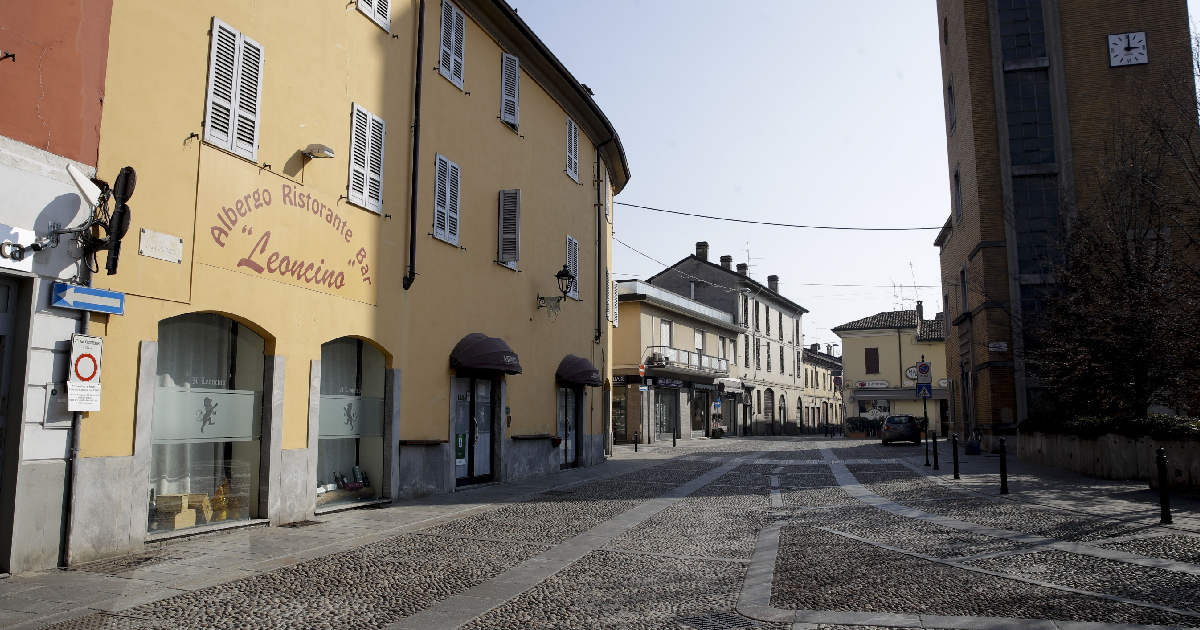 Photo : A deserted street in the town of Codogno, near Lodi, Northern Italy, Saturday, Feb. 22, 2020. A dozen northern Italian towns were on effective lockdown Saturday after the new virus linked to China claimed two fatalities in Italy and sickened an increasing number of people who had no direct links to the origin of the virus. The secondary contagions prompted local authorities in towns in Lombardy and Veneto to order schools, businesses and restaurants closed, and to cancel sporting events and Masses.

A dozen towns in northern Italy effectively went into lockdown Saturday after the deaths of two people infected with the new virus from China and a growing cluster of cases with no direct links to the origin of the outbreak abroad.

The secondary contagions prompted authorities in some Lombardy and Veneto towns to close schools, businesses and restaurants and to cancel sporting events and Masses. The mayor of Milan, Italy’s business capital and the regional capital of Lombardy, shuttered public offices.

A 78-year-old man infected with the virus died in Veneto. A post-mortem test performed on a 77-year-old woman in Lombardy came back positive, though it wasn’t clear if illness from the virus caused her death.

Hundreds of residents and workers who came into contact with 79people who tested positive were put into isolation pending results of their tests. Civil protection crews set up a tent camp outside a closed hospital in Veneto to screen medical staff for the virus.

In the town of Codogno, where the first patient identified in the northern cluster was in critical condition, closed supermarkets, restaurants and shops made main street practically a ghost town. The few people out wore face masks, which were coveted items after selling out at pharmacies.

Late Saturday, civil protection officials said 79 people had contracted the virus, including the two who died and one who was cured. Of the remaining 76, 54 were in Lombardy, 17 in Veneto, two in Emilia Romagna, two in Lazio — a Chinese couple from Wuhan — and one in Piemonte.

Lombardy government authorities said the region’s cases were traceable to a 38-year-old Italian who hadn’t traveled to China, but it remained unclear how he was infected. Ten towns in Lombardy received orders to suspend nonessential activities and services.

Veneto regional president Luca Zaia said Saturday that the contagion showed that the virus is transmitted like any flu and that trying to pinpoint a single source for the cases or to establish a link to China no longer were effective containment measures.

“You can get it from anyone,” he told reporters. “We can expect to have cases of patients who had no contact” with suspected carriers. While the virus isn’t particularly lethal, it can be for the elderly or people with existing conditions, he said.

The man who died in Veneto, for example, did not meet the main risk factors for the virus when he was diagnosed with pneumonia two weeks ago: he hadn’t traveled to China or come into contact with anyone who did. Therefore, the ill man wasn’t originally tested for the virus.

He was only tested after he didn’t respond to conventional pneumonia treatment, and by then it was too late, according to Francesca Russo, the head of healthcare for the Veneto region.

Along with eight other infected people, the man who died formed a cluster in his hometown of Vo’Euganeo, population 3,300. Russo expressed relief that to date, none of the hospital personnel who treated him has tested positive.

The first person to fall ill had met with a man who returned from China on Jan. 21, but he testednegative for the virus and has been ruled out as the source.Other people acquired their infections from the 38-year-old sick patient either through contact with him or the hospital in Codogno where he first received treatment Feb. 18.

More than 250 tests were completed in Lombardy, though hundreds more were being processed, including among the man’s colleagues at a Unilever plant near Codogno where he worked, Gallera said.

“Given how contagious it is, it’s possible the numbers will increase,” he said.

National and regional officials approved an ordinance that put 10 Lombardy towns in effective lockdown around Lodi, southeast of Milan, after the region reported a quadrupling of cases Friday. But individual cities outside the area covered by the ordinance, such as Cremona, issued their own restrictions after confirming there were local cases.

In Milan itself, however, life was largely continuing on as usual: Inter Milan was still scheduled to play Sampdoria on Sunday night in Italy’s Serie A soccer league, and Milan Fashion Week was wrapping up, even though chatter about the rising numbers accompanied the runway shows.

”It doesn’t seem to me in this moment for what regards our sector, our fashion week, that there are signs of danger,” Carlo Capasa, president of the Italian National Fashion Chamber, told The Associated Press. ”We are tranquil and prudent.”

However, the world’s largest eyewear trade fair, MIDO, announced it was putting off its Milan show until June because of the outbreak.

Despite the alarm, authorities urged calm and tried to balance precautionary closures with the economic reality of regions highly dependent on tourism and commerce. Hotel reservations in Venice were down one-third during the first weekend of Carnival, though floods in the lagoon city late last year likely scared off visitors.

“This is not an Italian ‘Wuhan,”” insisted Ivana Jlenic, president of the federation of Italian tourism and travel agencies, Fiavet. “Avoiding all travel at this time would just be alarmist.”

In Rome, doctors at the Spallanzani infectious disease hospital treating the first three people in Italy found to be infected with the virus – a Chinese couple from Wuhan and an Italian who contracted the virus in China – reported encouraging news in the otherwise bleak day.

The Italian patient, who tested positive for the virus two weeks ago, was cleared to leave the hospital, while one of the Chinese visitors tested negative for the first time.

Separately Saturday, 19 Italians who spent more than two weeks quarantined on a virus-stricken cruise liner in Japan landed at Rome’s military Pratica di Mare airport. They had been stranded on the Diamond Princess since Feb. 5.

Following the first health checks and decontamination process, the passengers were transferred to the military campus of Cecchignola where they will spend a 14-day isolation period.

Britain also welcomed home passengers from the Diamond Princess: 32 British and other European passengers landed at a British military base in southwest England. They will be quarantined for 14 days at Arrowe Park hospital in northwest England, where more than 80 other Britons evacuated from Wuhan, the Chinese city at the center of the outbreak, have already spent time in isolation.

Four U.K. nationals from the Diamond Princess who tested positive for the virus are being treated at hospitals in Japan.

Britain has nine confirmed cases of the virus.

Germany to get its first woman foreign minister