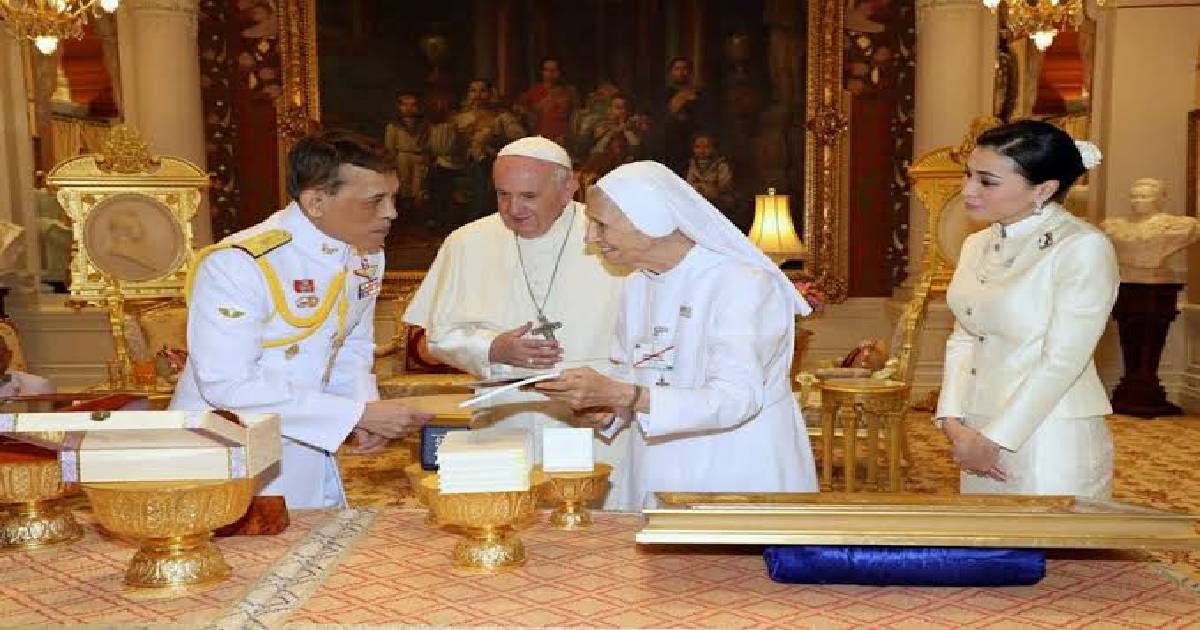 She made him wait for her while she chatted with Thailand’s king and queen. She chided him for only visiting Bangkok and not the “real Thailand.” And she got a chuckle out of “Jorge” when she took her time translating his off-the-cuff Spanish for local priests and nuns to understand.

Sister Ana Rosa Sivori has taken something of a star turn during her second cousin’s visit to Thailand, assuming an unprecedented role for a woman as papal whisperer and translator, who doesn’t seem fazed that her charge is Pope Francis.

Usually papal aides are men, and they stay in the shadows, showing wallflower-like deference to the leader of the 1.2-billion strong Catholic Church. Not so Sivori, who treats Francis with the respect owed a pope but nevertheless displays the confidence of a nun who has spent more than a half-century ministering to Thailand’s faithful.

Sivori, a 77-year-old member of the Salesian order, is an assistant principal at a Salesian school in Udon Thani, in northern Thailand. She arrived in the country in 1966 as a young sister from Argentina, where her father and Jorge Mario Bergoglio’s mother were first cousins.

She has said her father knew early on that there was something special about “Jorge,” a sentiment that spread to the rest of the family.

“He always said ‘No one touches Jorge.’ He had a special affection for him,” Sivori told Italian journalists before the trip.

It’s apparently mutual: Francis sends Sivori handwritten letters regularly, and he prepares packages of books for her to read, with envelopes that he addresses himself.

Sivori lamented that Francis would only visit Bangkok, saying its skyscrapers and luxury hotels were by no means representative of the rest of the country. The “real Thailand” was outside the capital, she said.

Francis set the tone of their time in Bangkok when he descended from his Alitalia charter on Wednesday afternoon.

Before even greeting Surayud Chulanont, the former prime minister and head of King Maha Vajiralongkorn’s Privy Council who was dispatched to the airport to welcome him, Francis broke diplomatic protocol to give Sivori a kiss on each cheek as she waited at the foot of the stairs.

That informality carried through the rest of their time together, with Sivori taking the place of the local bishop in Francis’ car as he went from appointment to appointment. Based on their body language, she was giving him pointers and details at each stop.

The visuals were striking, given Francis has no female advisers and usually has a cleric by his side whispering in his ear.

Francis has long insisted that the Catholic Church is “female” and that women should have a more prominent role in leadership positions.

That he finally let a woman upstage him a bit was remarkable, especially in a country known for the many women and girls who are trafficked and exploited.

Sivori’s starring role peaked Thursday afternoon, when she joined Francis for his private meeting with King Maha Vajiralongkorn and Queen Suthida at the royal palace.

Sivori translated, dutifully describing the gifts Francis brought and cheerfully relaying to the pope what the king had said.

At the end of their visit, Francis bade the royals farewell and made his way down the stairs to the waiting car.

Sivori, though, remained at the palace entrance, chatting for nearly a minute with the royal couple while Francis waited for her.

Eventually, she finished her own goodbyes and took her place next to him in the back seat.

Francis appeared to rib her the next day when Sivori was translating his remarks to nuns and priests at St. Peter’s Parish outside Bangkok.

As he tends to do when speaking to a religious audience, Francis deviated from his prepared text and urged the nuns to allow themselves to be “surprised” by the joys and sorrows of their vocation.

Sivori took a few seconds to write down his comments before beginning the translation. The delay prompted Francis to look at her, raise his eyebrows and gesture for her to get on with it.

Their silent exchange Friday drew laughs from the pews and a heartfelt chuckle from the pope, who apologized for not being able to speak directly to his flock.