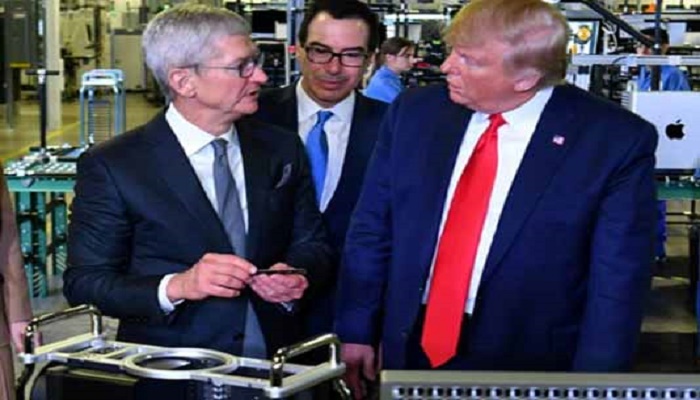 US President Donald Trump toured Apple’s Texas manufacturing plant Wednesday in a visit marking a brief truce in the White House war on Silicon Valley and an unlikely “bromance” with chief executive Tim Cook, reports AFP.
“He is a very special person as far as this country is concerned,” Trump said of Cook as they stood side-by-side, adding that he’s done a “great job.”The visit gave Trump a chance to hail American manufacturing and step back, at least temporarily, from his tirade against big technology firms, including Apple, which he criticizes for manufacturing its products abroad.

Trump praised what he said was an “incredible product that is made right here.”

“When you build in the United States you don’t have to worry about tariffs,” he said, referring to those waged by China.

Apple announced in September it would keep making its Mac Pro computer in the United States, after obtaining tariff exemptions for some components in the high-end computers.

The developments show an unusual Trump-Cook relationship in sharp contrast with the president’s attacks on other tech giants.