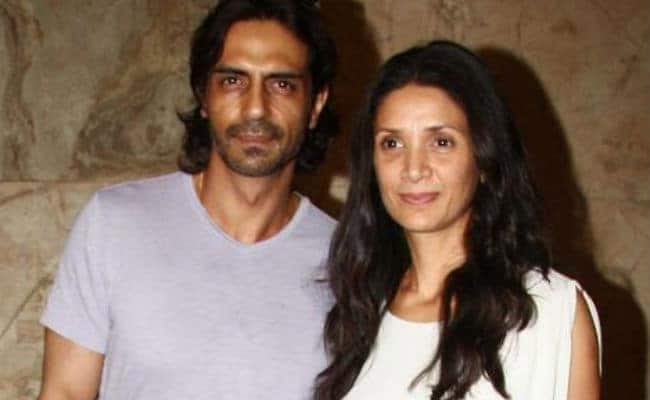 Actor Arjun Rampal and former supermodel Mehr Jesia, who announced their separation last year, are now officially divorced, reported Mumbai Mirror. “A family court in Bandra granted them divorce by mutual consent on Tuesday. Principal Judge Shailaja Sawant granted the couple divorce under the Special Marriage Act…,” stated the Mumbai Mirror report. Arjun and Mehr’s daughters Mahikaa, 17, and Myra, 14, will stay with Mehr Jesia, the report added. The 46-year-old actor refused to comment on the matter when approached by the publication, who quoted him as saying: “Why would I want to talk about it? Why is it anyone’s business? I don’t want to talk about it.” Arjun Rampal is currently dating model-designer Gabriella Demetriades. The couple welcomed a son named Arik in July this year.
Arjun Rampal and Mehr Jesia announced their separation after 20 years of togetherness in a lengthy statement last year. “After a 20-year-long beautiful journey filled with love and beautiful memories, we would like to share, that all journeys have different paths. We feel that it is time for us to move on to different destinations henceforth. We have always been solid when it has come to us, we will continue to be solid for each other and our loved ones, as we embark upon a new journey,” the former couple had jointly released this statement. Arjun and Mehr married in 1998 during their modelling days. In October last year, Mehr Jesia visited Arjun Rampal after the death of his mother.

After the separation announcement, Arjun Rampal was linked to Sussanne Khan as a speculated reason for his split, which he appeared to dismiss with a cryptic Instagram post, writing: “”Some mornings start with freshly brewed coffee, others with freshly stirred link ups! Right now it’s just my cuppa and me.”Arjun Rampal has featured in films like Om Shaanti Om, Rock On!!, D-Day, Ra.One, Roy, Housefull and Raajneeti. Arjun was last seen in 2018 film Paltan.