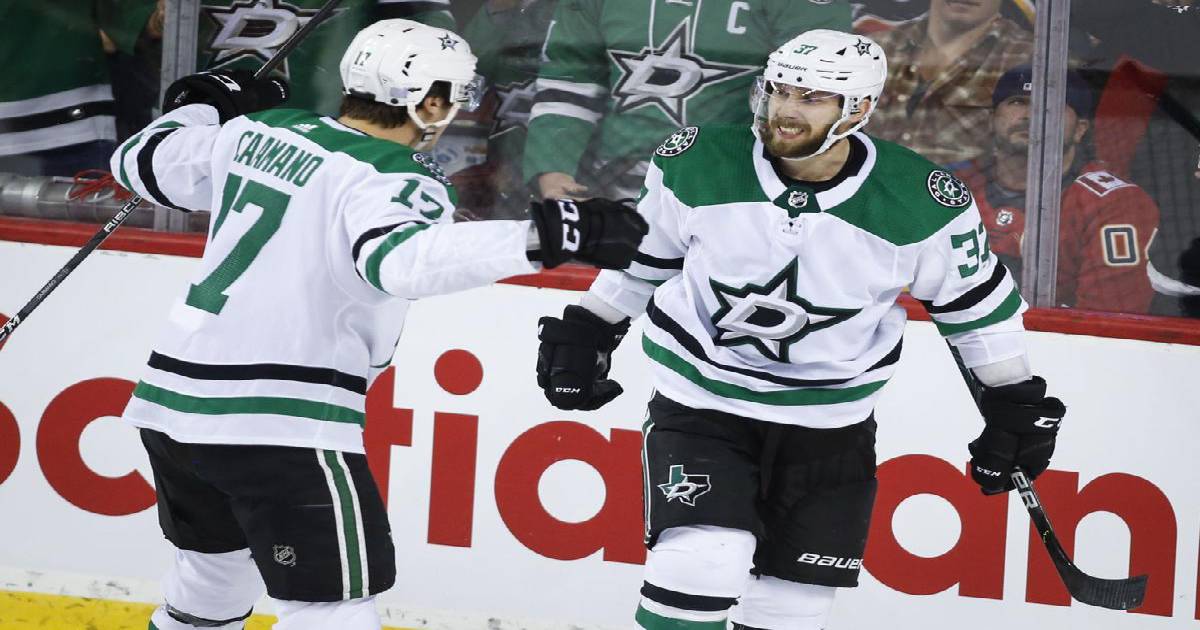 The first NHL goal for 29-year-old Dallas forward Justin Dowling will be a memorable one for many reasons.

For one, it was the game-winner as the resurgent Stars continued their strong play with a 3-1 victory over the Calgary Flames on Wednesday night. Second, it came in his hometown before a bunch of friends and family. Third, his mom missed it because she was in the beer line at Scotiabank Saddledome.

“That’s why we’ve got TV and highlights and everything,” Dowling said with a smile. “So she’ll see it eventually. It’s OK. I’m just happy they were here.”

Undrafted out of Swift Current in the Western Hockey League, Dowling has played 495 games in the minors. Wednesday was his 34th NHL game.

“It felt great,” said Dowling, who entered with just three career assists. “I’ve had a lot of close calls with pucks sitting on goal lines, hitting posts. I think my first game last year I had one disallowed. Long time coming, but it feels good. A lot of weight off my shoulders.”

Dowling toe-dragged around Calgary goalie Cam Talbot and fired from a sharp angle just inside the far post to make it 2-0 at 6:38 of the third period.

“Your first NHL goal in your hometown for the game-winner. It doesn’t get much better than that,” Stars goaltender Ben Bishop said. “I don’t think you can draw it up as a kid any better. … Maybe if he was playing for the other team, but I’m glad he’s on ours.”

The unassisted goal on a 2-on-1 came just seconds after the Flames blew a chance to pull even. Mark Giordano and Mikael Backlund went back and forth with short passes on a 3-on-1 before Backlund fired wide from directly in front.

“Unfortunately, we had a 3-on-1 the other way and we didn’t bear down when we needed to. Instead of 1-1, it’s 2-0 and that’s just how hockey goes sometimes,” Talbot said.

Joe Pavelski scored twice for Dallas, including into an empty net. The Stars are 8-1-1 after stumbling to a 1-7-1 start this season.

“We’ve had a good little stretch but we’re not out of the woods by any means. We’re one game (above .500). Our team’s got higher standards than that,” Pavelski said.

“Tight game the whole game,” Calgary forward Matthew Tkachuk said. “That second goal hurt a little bit when they got it, then we got one right back and it’s still a one-goal game. We gave a little bit of a push in the third, but not enough.”

Talbot turned aside 29 shots but fell to 1-4-0. He was especially sharp in the second, keeping the Flames close in a period when they were outshot 18-6 but only gave up one goal.

Dallas grabbed the momentum early in the second thanks to a goaltender interference penalty on Sam Bennett. It was on the sixth shot of that power play that Pavelski put a bouncing puck past Talbot.

“I gave up a few too many rebounds in the second period, made myself and some of the guys work a little extra hard. But overall, I made a lot of key saves when we needed it in the second period to keep it a one-goal game heading into the third,” Talbot said. “Just needed that one more save in the third to make it more attainable.”

Both teams had eight shots on goal in a scoreless first period. Calgary had the better chances, but could not solve Bishop.

The best opportunity came in the opening minute when Andrew Mangiapane appeared to have Bishop beaten, but couldn’t tuck the puck behind his outstretched pad.