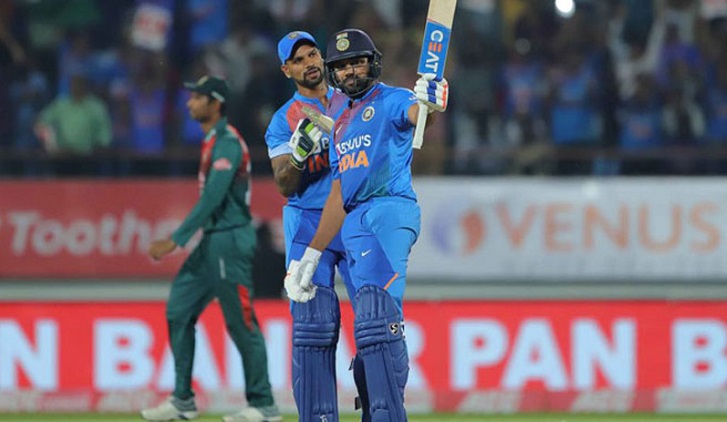 Bangladesh were brought down to earth as India defeated them by eight wickets in Rajkot on Thursday night to level the ongoing three-match T20I series, courtesy of Rohit Sharma’s blistering half century.
The visitors, who were leading in the series by winning the first match, spoiled the party as they failed to put up a challenging total despite being comfortably placed as they made 153-6.

Later, on the back of Rohit’s 43-ball 85, the host reached 154-2 in 15.4 overs.Rohit hammered six fours and six sixes and made a mockery of the visitors’ bowling attack that looked they were just short of options against one of the most aggressive batsman of the present-day cricket.

Rohit decided to celebrate his 100th Twenty20 match in style as he played shots all across the park on his way to the half-century that helped the host to get back from great despair as they were at risk of losing a series despite being favourites at the start of the tour.

Aminul Islam picked 2 for 29 that included the prized scalp of Rohit as he was caught by (sub) Mithun when he cleared his front leg and went for the big swipe across the line when a half tracker was offered and managed to get it off the thick top-edge and the sub fielder at deep mid-wicket pouches it neatly sliding to his right across the boundary triangles.

Bangladesh squandered a good chance to score a tall total in a pitch conducive to batting despite getting a decent start as most of the top order batsmen got the start after Indian captain Rohit Sharma, on his won the toss and put Bangladesh in batting but they simply couldn’t carry on it.

Opener Mohammad Naim was the highest scorer for the side with 36. Soumya Sarkar and captain Mahmudullah Riyad made identical 30 runs while Liton Das chipped-in-with 29 runs.

While one or two of them were expected to reach at least half-century mark, neither of them could do them in a flat batting deck.Chasing the history to be a first overseas team to beat India in a three-match T20 series on India soil following their seven-wicket victory in first game, Bangladesh made a decent start with opener Liton Das and Mohammad Naim sharing 60 runs in just 7.2 overs.

Liton survived twice in consecutive overs on 17 and 26 when India failed to hold on the chance but he was run out like an apprentice.

Naim started promisingly with three boundaries of Khaleel Ahmed and looked gained the momentum of a big score.

A needless slog however against Washington Sundar got the better of him after he struck five fours in his 31 ball-36.

At this phase, when Bangladesh was operating with 8 runs per over, India, desperate to level the series, clawed back into the game thanks to Yuzvandra Chahal who dealt a double strike in the 13th over, taking out Mushfiqur Rahim (4) and Soumya Sarkar.

Afterwards, Indian bowlers stifled Bangladeshi batsmen for runs and took wicket in regular interval to them restricted to a total, which for the time being looked to be achieved with ease.

Famed India cricket stadium to be used for coronavirus quarantine

Real Madrid in sight of title after beating Alaves