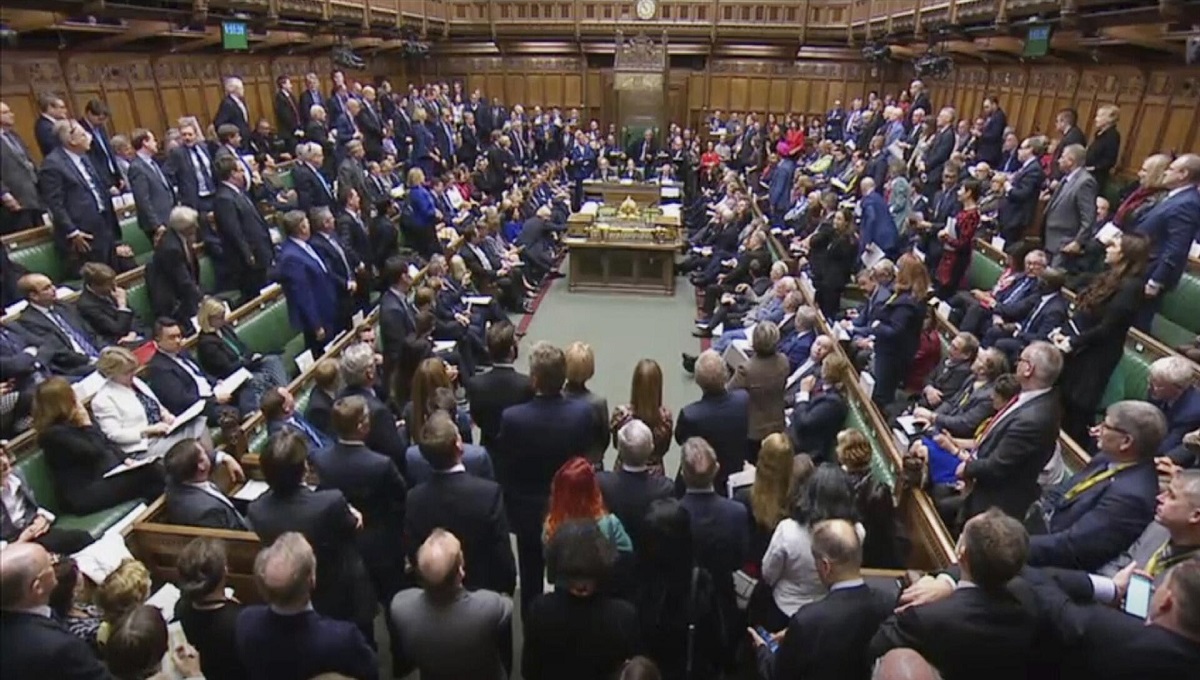 London, Oct 19 : In a major blow to British Prime Minister Boris Johnson, U.K. lawmakers voted Saturday to postpone a decision on whether to back his Brexit deal with the European Union, throwing a wrench into government plans to leave the bloc at the end of this month.

At a special session of Parliament intended to ratify the Brexit deal, lawmakers voted 322-306 to withhold their approval on the Brexit deal until legislation to implement it has been passed.

The vote aims to ensure that the U.K. can’t crash out of the EU without a divorce deal on the scheduled Oct. 31 departure date. But it means Johnson he has to ask the EU to delay Britain’s departure, since Parliament previously passed a law compelling him to do that if a Brexit divorce deal had not been passed by Saturday.

The government still hopes it can pass the needed legislation by the end of the month so the U.K. can leave on time.

A defiant Johnson said after the vote that he was not “daunted or dismayed” by the result and would push ahead with plans to leave the EU.

As lawmakers debated, tens of thousands of anti-Brexit demonstrators descended on London to march to Parliament Square, demanding a new referendum on whether Britain should leave the EU or remain. Protesters, many wearing blue berets emblazoned with yellow stars symbolizing the EU flag, poured out of subway trains and buses for the last-ditch protest effort.

Bruce Nicole, a vicar from Camberley southwest of London, said the Brexit deal would harm Britain.

“I fervently believe that we should remain in the EU,” he said. “I am British but I am also European.”

In Parliament before the vote, Johnson implored legislators to ratify the deal he struck this week with the bloc’s 27 other leaders. He said members of the House of Commons should “come together as democrats to end this debilitating feud” over Brexit, which has bitterly divided the country since British voters narrowly chose in a 2016 vote to leave the EU.

“Now is the time for this great House of Commons to come together… as I believe people at home are hoping and expecting,” Johnson told lawmakers.

But he did not get the result he sought.

Trouble began when House of Commons Speaker John Bercow said he would first allow a vote on an amendment that puts the vote on the deal off until another day.

The amendment makes support for the deal conditional on the legislation to implement it being passed by Parliament, something that could take several days or weeks. It also gives lawmakers another chance to scrutinize — and possibly change— the Brexit departure terms while the legislation is passing through Parliament.

And he warned Saturday that the bloc’s approval could not be guaranteed.

“There is very little appetite among our friends in the EU for this business to be protracted by one extra day,” Johnson said. “They have had three and a half years of this debate.”

French President Emmanuel Macron made the same point a day earlier in Brussels.

“I want us to finish this off and speak about the future,” Macron said. “The Oct. 31 date must be respected. I don’t believe new delays should be granted.”

The EU’s budget commissioner, Guenther Oettinger, told Germany’s Welt am Sonntag newspaper that if British lawmakers reject Johnson’s Brexit deal, the U.K. is likely to crash out of the bloc with no deal.

Britain could still leave the EU on Oct. 31, if Parliament approves the legislation — the Withdrawal Agreement Bill — in time. The government plans to introduce the bill early next week and could hold late-night sittings of Parliament in hope of getting it passed within days.

As lawmakers thundered on in their first Saturday sitting since the 1982 Falklands War, the streets of London turned into a sea of blue. Some demonstrators with bells strapped to their legs and wielding sticks performed a traditional morris dance and chanted: “Morris, not Boris!” to cheers from onlookers.

Others were deeply fearful about leaving the EU.

Sarah Spoor from west London said she had two children with disabilities and feared for their health because of possible shortages of medicines and the fact that EU doctors and nurses could leave the U.K. after Brexit.

Johnson hopes for success in getting a fractious Parliament to back the deal after his predecessor, Theresa May, failed three times to get lawmakers behind her Brexit plan.

Yet his hopes of getting the deal through Parliament were dealt a blow when his Northern Ireland ally, the Democratic Unionist Party, said it would not back him. The party says Johnson’s Brexit package — which carves out special status for Northern Ireland to keep an open border with EU member Ireland — is bad for the region and weakens its bonds with the rest of the U.K.

To make up for the votes of 10 DUP lawmakers, Johnson has tried to persuade members of the left-of-center Labour Party to support the deal. Late Friday the government promised to bolster protections for the environment and workers’ rights to allay Labour fears that the Conservative government plans to slash those protections after Brexit.

“This deal is not good for jobs, damaging for industry and a threat to our environment and natural world,” he said. “Supporting the government this afternoon would merely fire the starting pistol in a race to the bottom in regulations and standards.”