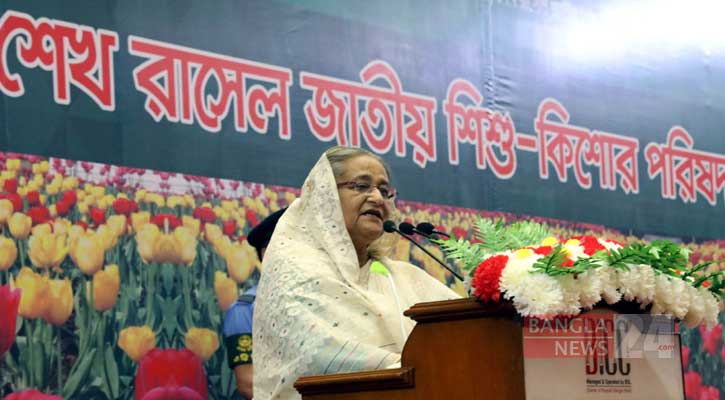 Issuing a strong warning against child repression, Prime Minister Sheikh Hasina on Friday said those involved in killing and torturing children must face ‘toughest’ punishment.
“Repression on children will not be tolerated anymore. People involved in killing and torturing children must have to face the toughest punishment,” she said, addressing a function marking the birthday of Sheikh Russell, youngest son of Father of the Nation Bangabandhu Sheikh Mujibur Rahman.

Sheikh Russell National Shishu-Kishore Parishad arranged the programme at Bangabandhu International Conference Centre in the capital.The premier said, “People have been encouraged in killing and torture of the children since August 15 in 1975 when not only the President, but also the children and women were killed. But they were not given punishment at that time.”

“Instead of punishing them, a law was enacted to stop the trail for the heinous killings, rather the killers were rewarded. They even didn’t allow us to file any case in this regard,” she added.

Describing the recent killing of a child reportedly by his father as the outcome of a perverted mentality, she said, “Such a killing might not take place, if the trial of the killings of women and children were held at that time.”

The premier said that her government has been working to ensure beautiful life for each of the children so that none of them has to face the same fate of Sheikh Russell.

Nothing that Father of the Nation Bangabandhu Sheikh Mujibur Rahman had enacted Children Rights Act in 1974 for protecting the rights of children, she said, “We have formulated the National Children Policy in 2011 and taken measures to protect children’s rights and given special attention so that children can get the scopes for education, sports, physical and cultural exercises.”