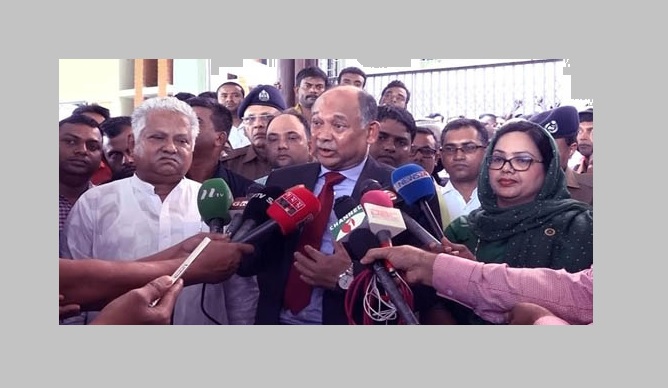 Railway Minister Nurul Islam Sujon, MP, has said Bangladesh Railway (BR) will launch the much-desired Intercity Train on the Kurigram-Dhaka-Kurigram route from October 16 next.
“Prime Minister Sheikh Hasina will launch the proposed ‘Kurigram Express’ Intercity Train through a video conferencing from Dhaka on the day,” the Minister said while visiting Kurigram Rail Station in Kurigram district town on Tuesday evening.

He said there was no Intercity Train service on the Kurigram-Dhaka-Kurigram route and the present government has decided to launch an Intercity Train directly from Kurigram to Dhaka.The BR is importing 200 passenger coaches from Indonesia, and of them, 50 coaches have already arrived in the first consignment.

“As per announcement of Prime Minister Sheikh Hasina following long-standing demand of people of Rangpur region, we are going to launch three Intercity Trains from Rangpur, Kurigram and Lalmonirhat to Dhaka on October 16,” the Minister said.

“We have sent name of the proposed new Intercity Train as ‘Kurigram Express’ to the Prime Minister,” he said adding that Rangpur Express and Lalmonirhat Express are currently operating from Rangpur and Lalmonirhat to Dhaka.

The passengers of these two Intercity Trains complain that those are old and cannot provide proper services to meet their needs and facilities.

“To resolve these problems, the newly imported passenger coaches will be added to these currently running two Intercity Trains along with launching of the ‘Kurigram Express’ on these routes from October 16 next,” the Minister said.

“Though the railway was running behind, we have started moving the railway forward. Around 100 railway stations are still remaining closed,” he said.The Minister said the damaged railway lines and closed railway stations would be repaired soon and a double line railway project be implemented to further improve railway communication facilities across the country.

4 to die for killing boy in Sylhet