Sonia Gandhi is back as Congress president 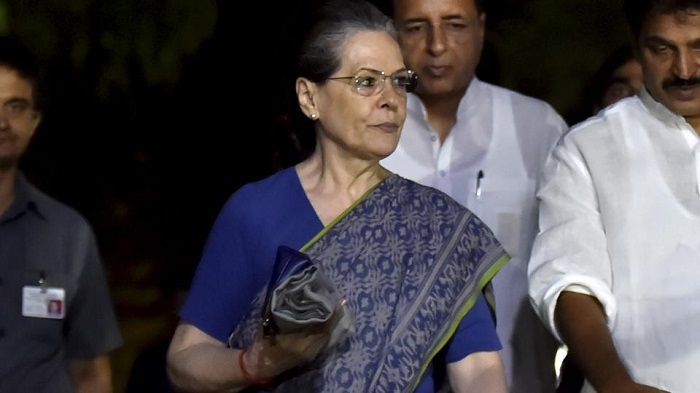 Sonia Gandhi was chosen to be president of the Congress on Saturday, albeit in an interim position, as the grand old party gropes for direction in the aftermath of a devastating electoral defeat that prompted her son and successor Rahul Gandhi to resign.
Sonia Gandhi gave up the post about two years earlier and now she is back again after a last- ditch effort by the Congress Working Committee (CWC) was failed to persuade Rahul Gandhi, 49, to continue.

Sonia Gandhi, 72, who is also chairperson of the United Progressive Alliance (UPA), was chosen interim president of the 134-year-old party after a last- ditch effort by the CWC to persuade Rahul Gandhi, 49, to continue failed.

“The CWC requested Rahul Gandhi to take back his resignation and remain as the Congress president. But he politely declined this request while maintaining that he respects the sentiments of people in the party… After this, the CWC unanimously decided that Sonia Gandhi should handle the post of the interim chief until a regular president is picked. She accepted this request,” Congress chief spokesperson Randeep Surjewala said.

Kumari Selja, a Congress member of the Rajya Sabha, told reporters that the CWC had taken the decision out of deference to the sentiments of Rahul Gandhi, who rose to the position of party president on December 16, 2017, and gave up the post on May 25 after the party’s Lok Sabha electoral rout.

When the CWC met for a second time on Saturday in the evening, it was once again proposed that Rahul Gandhi take back his resignation, but Priyanka Gandhi informed the meeting that he was adamant and did not want to reconsider it, according to a leader present at the meeting.

At this point, former finance minister P Chidambaram suggested that Sonia Gandhi take over as the party chief. The proposal was unanimously backed by the CWC, the leader added.While Sonia Gandhi refused to accept the request at first, she agreed after repeated pleas by party leaders on the condition that she would stay on interim chief only till the election to choose a full-time president was held. Sonia Gandhi said her returning as the party chief would again give a handle to the opponents to attack the Congress as the family was unwilling to give up its hold over the party, she said.

She insisted that this point be included in the resolution released after the meeting, he added. The resolution said that Rahul Gandhi had declined to withdraw his resignation. “Consequently, the CWC unanimously resolved to request Smt. Sonia Gandhi to take over Interim President pending the election of a regular President by the AICC {All India Congress Committee}.”

Rahul Gandhi came to the meeting in the evening only after he was told that the CWC was going to discuss the Jammu and Kashmir situation and he left soon after the presentation on the state was over.

In the national elections held in April and May, the Congress won just 52 seats in the Lok Sabha, less than a tenth of the strength of the 543-member House; it was only a slight increase from the 44 it won in 2014. In comparison, the ruling Bharatiya Janata Party raised its tally to 303 seats from 282 in 2014. Many attempts by party rank and file, as well as some allies of the Congress, to convince Rahul Gandhi to take back his resignation failed to move the politician, who faced a personal setback when he lost election to BJP’s Smriti Irani in Uttar Pradesh’s Amethi, his family bastion. He still entered the Lok Sabha as MP from Kerala’s Wayanad. Sonia Gandhi took over as party leader in 1999 and led the Congress to back-to-back general election victories in 2004 and 2009, after declining to be prime minister after the first win, when she nominated economist and former finance minister Manmohan Singh to the nation’s top executive post. Confronting a slew of corruption scandals that marred its second term, the Congress lost power in 2014.

CWC, the party’s 54-member apex body, had met earlier on Saturday to decide on a name for president but went along with Rahul Gandhi’s suggestion to make it a participatory exercise and get the opinions of party leaders from the states as well. The CWC then formed five zonal groups to consult with state leaders to zero in on a party chief.

In many of the five panels that held discussions for a larger part of the day, there were many voices that insisted that Rahul Gandhi continue to lead the party. Two Congress leaders that HT spoke to confirmed that leaders from at least two zonal groups (north and south) demanded that Rahul Gandhi stay on as chief.

Senior CWC members, who were part of the discussion put the point across that some of the party’s senior-most leaders had repeatedly approached Rahul Gandhi with the request and he had declined.

Punab leaders of the Congress were especially outspoken in insisting that Rahul Gandhi retract his resignation. Two Congress leaders said Congress general secretary Priyanka Gandhi was present when the leaders from Punjab spoke. They appealed to her to convince Rahul Gandhi to come back. Another Congress leader told HT that the discussion in the southern group was not very different where leaders demanded Rahul Gandhi be requested to take charge of the party despite being told by senior leader Anand Sharma that Rahul had rejected a similar request made by former prime minister Manmohan Singh at the CWC meeting held earlier in the day.

Sonia Gandhi is returning to an active role in the Congress at a time when the party is in disarray, having recently lost power in Karnataka after a rebellion by some of its legislators. “Sonia Gandhi is the only appropriate choice to be the Congress president in these trying times,” chief spokesperson Surjewala said.