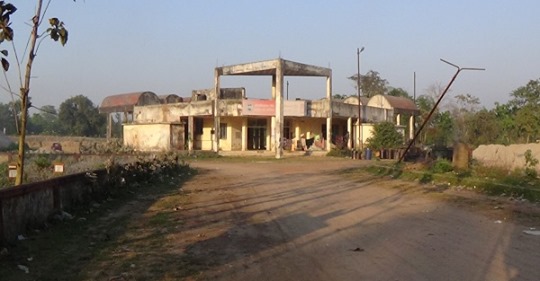 Moulvibazar Correspondent : Moulvibazar Poura Bus Terminal, the only bus stand in in the town, has been lying unused for the last eight years due to reluctance among transport workers to use it.

Claiming that passengers do not want to go to the terminal, half a km off Kusumbagh, the heart of the town, transport workers are now using main thoroughfares for picking and dropping passengers, causing traffic chaos and inflicting sufferings on the dwellers.

The bus terminal was constructed on 3 acres of land at Jogidahar by the Dhaka-Sylhet regional highway at a cost of Tk 4 crore.

However, it could not be run for long due to unwillingness among transport owners to use the bus stand.

Later, the district administration sat with the transport owners and took an initiative to ensure so that buses use the terminal.

Buses plying different inter-district routes, including ones with Dhaka, Sylhet, Habiganj and Cumilla, used the terminal for a few days.

However, they abandoned the terminal again and started using different roads as bus stands illegally. Since then, the bus terminal remained unused.

The Srimanagal road is now known as the main bus stand of the district town. Both carriageways of the road are now used as ‘Dhaka Bus Stand’, leading to traffic chaos in the town.

Meanwhile, infrastructure of the bus terminal is decaying since it remained abandoned for long.

During a field visit to the terminal, this correspondent found cracks developed at different places of walls of the terminal building while floor tiles went off at many spots and glass windows of different rooms are wide open.

Counters allotted for different bus companies remained closed as they do not use those.

Local trader Sadique Ahmed said no bus entered the terminal. “Only buses plying the Sylhet-Habiganj route stopped at the main road in front of the terminal for picking and dropping passengers. No other buses even approach the road.”

Although many business entities were established around the bus terminal, traders are now counting losses, he said.

“Drivers as well as passengers also don’t want to go there. One has to pay Tk 20-30 for going to the district town from the bus terminal,” he said.

He also alleged that the municipality authorities constructed the bus terminal in an unplanned way without consultations with the stakeholders.

However, municipality mayor Fazlur Rahman said his predecessor constructed the bus terminal in a planned way to free the district town traffic jam and bring an end to haphazard parking of vehicles.

He also urged the transport owners and workers to use the bus terminal.

Nearly 50pc of Japan’s singles have no dating prospects: Survey