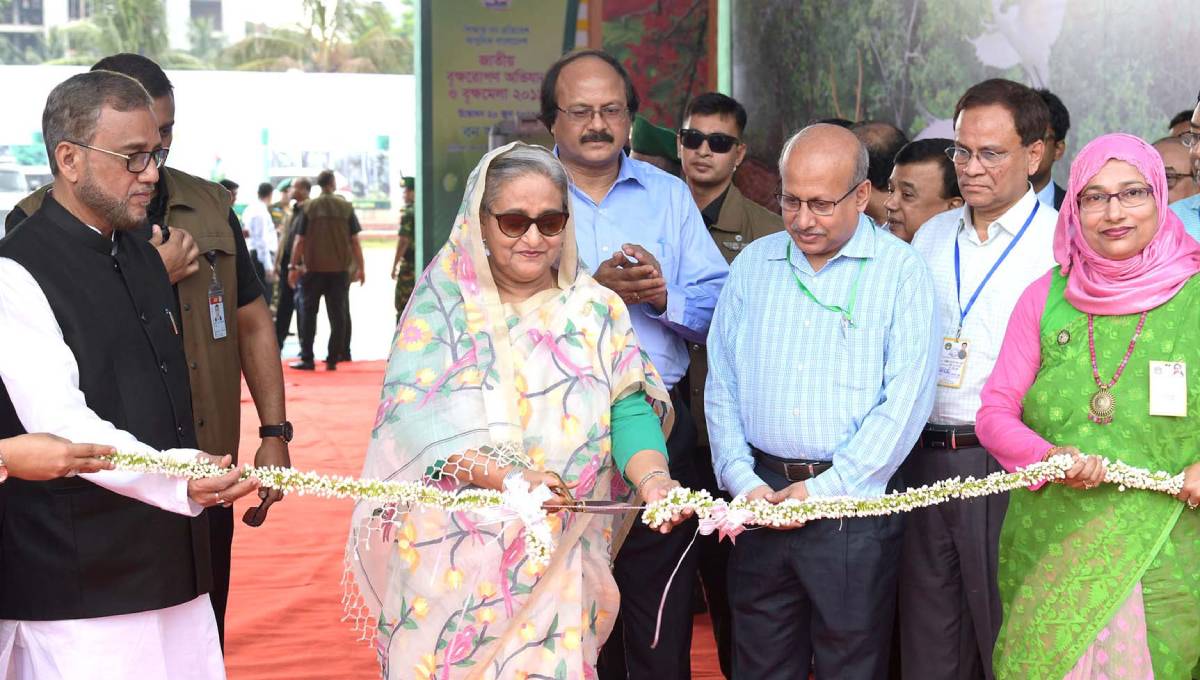 Dhaka, Jun 20 : Prime Minister Sheikh Hasina on Thursday urged all to plant and nurture saplings in their respective workplaces and houses with a view to protecting the environment.

“I would like to request you all who are in our schools, colleges, offices and courts to plant some saplings in your respective workplaces and houses. Also our children will have to be taught it (tree plantation). You’ll also have to nurture trees alongside plantation of saplings,” she said.

The Prime Minister said this while inaugurating the programmes of the World Environment Day and Environment Fair-2019 and the National Tree Plantation Campaign and Fair-2019 at Bangabandhu International Conference Centre (BICC) in the capital.

She also urged everybody to plant at least three saplings – a fruit-producing tree, a timber-producing and aherbal-contributing one.

Noting that creating green belts is very essential for the sake of the environment, Hasina said her government’s target is to bring 20 percent land of the country under forestation. The government also continues various activities to accomplish the target, she added.

The Prime Minister asked to keep tree plantation programme and consider the protection system of water bodies while undertaking any development project.

According to the WHO, some 4.2 million people die every year as a result of exposure of ambient (outdoor) air pollution, while 3.8 million die due to household exposure to smoke from dirty stoves or fuel, she said.

With the modernisation and rise in technology use, people damage and pollute the environment in many ways to make their lives comfortable, she said.

“We’re polluting the air regularly in various ways by our irresponsible activities,” said Sheikh Hasina adding that whatever people use to lead a modern life such as the use of car and airplane are polluting the environment.

She asked the researches to consider the environmental damages caused by the use of modern equipment and technology in their study.

The Prime Minister said though the government gave shelter to displaced Rohingyas on humanitarian grounds, but the forests in Cox’s Bazar was damaged due to the influx of Rohingyas.

She said her government has taken massive programmes to protect the World largest mangrove forest, Sundarbans, including creation of alternative employment for the local people, expanding the navigability of rivers and channels through dredging and reducing salinity in the water of the Sundarbans.

About climate changes, Hasina said the government has formulated Bangladesh Climate Change Strategy and Action Plan and raised a climate fund to face adverse impacts caused by the climate changes. The government allocated some Tk 3,500 crore for the fund, she said.

The Prime Minister said there are a total of 6,78,601 beneficiaries in the social forestation and some Tk 356.82 crore profit money has so far been disbursed  among 1,68,564 beneficiaries.

Environment, Forest and Climate Change Minister Md Shahab Uddin presided over the function, while Chairman of the Parliamentary Standing Committee on the ministry Saber Hossain Chowdhury spoke on the occasion.

The theme of this year’s World Environment Day is ‘Air Pollution’ with the slogan- Beat Air Pollution.

At the function, Prime Minister Sheikh Hasina handed over the National Environmental Award-2019 to three individuals and two organisations under two categories for their contributions to the environment.

Besides, she handed over cheques among the beneficiaries for the profit earned from social forestation.

Hasina inaugurated Sheikh Kamal Wildlife Centre in Gazipur and the 12-storey PoribeshBhaban in the city.

The Prime Minister opened the National Tree Plantation Campaign by planting a tamarind sapling on the BICC premise.

This year’s theme for the National Tree Plantation Campaign and Tree Fair is ‘Forest and Ecology in Education, Building modern Bangladesh’ Green.’